It’s rare I tout the virtues of a living artist. In fact, the living artist I like the best is myself. That’s why I take up the brush and the graphite stick in the first place—to hand hew a “replica of my own Divinity.” So when I see the Divinity in another artist’s work, I am hit in the gut. It influences me. And mostly these artists are long dead. But not Robert Froh, he is fully alive and living as an American expat in Barcelona.

I have been thinking of this line with some force: “The Awkward and the Raw meet the Certain and the Disciplined and Transform into the Elegant.” I would apply this statement to my own work. I was too rebellious in art school to complete my anatomy lessons, so my approach to the human figure is definitely founded in the Awkward and the Raw, but over the years I applied Certainty and Discipline to my craft, and hopefully, I think many of you would agree (my dear “Art Lookers”) I verge on the Elegant in my “portraits of the Masters.” 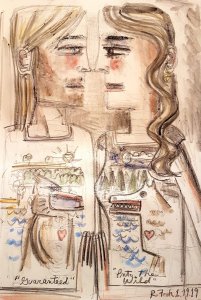 “INTO THE WILD” drawing by ROBERT FROH

I don’t know much about Robert. I know he is from the northern zones of the USA. He is a man from the North. Pensive. Inner. Joie de Vivre is tempered in us Northern People. We had to put up with winters. We had to go within to get our warmth. We had to introspect, because we spent a lot of time indoors. We became fiddlers and painters. We liked to tinker with stuff. Robert is such a kindred soul. I recognized him immediately. I don’t even know how. He popped up on a Facebook feed and there it was—instant connection.

Then I saw his profile pic: It looked like a Block Head. A rather nice “block head.” It looked like he could have carved it out of a section of a 2″x4.” For you readers who are not carpenters, a “2×4” is a standard “stud” with which houses are framed and built. It is one of the most basic building materials there is. So to carve out of a block of wood that came from a 2″x4,” the end result will usually look—well—”kinda blockey.” In Robert’s work, I found this block like quality refreshing, unapologetic, forceful, and unabashed in asking me to appreciate this “rawness.” 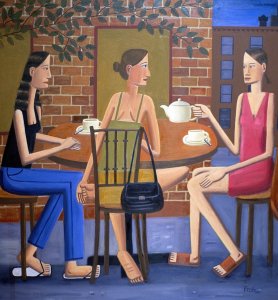 Then I saw this painting of “Three Girls At Tea.” They were kind of “stick figures,” but oh so sweet and elegant. So polite and dainty, yet so bold and woody. And the perfect drama he created—in the teapot. So perfectly placed; and such a ceramic forte of white porcelain, we have all used one like this in our favorite diner. GOD, so true to the heart. The man painted into my heart. And these gals—millennials. What a vision into them. A bit shy, these ones, but coming into their power as a force upon the planet. The two on the left in a direct profile gaze—like, well, pour the tea, dammit. And the real skinny one in the red dress, with little budding breasts—”Well ok, I am straight in my delivery, sisters. Here you go.” So much is said. So much is said without saying anything. Robert painted himself into the core of anyone who looks at this picture with eyes to see. 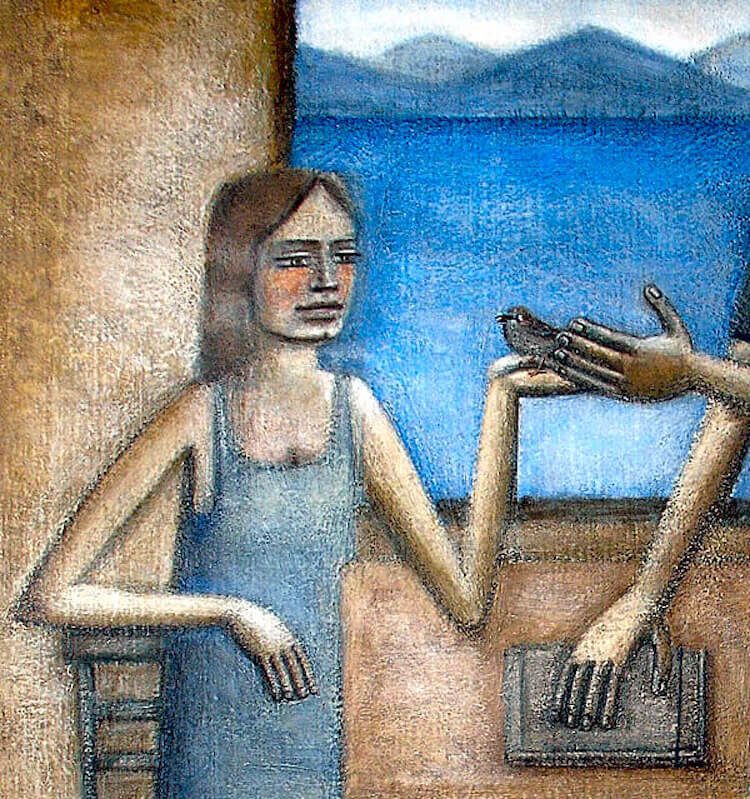 “THE SPARROW’S SONG” by ROBERT FROH

Robert is a religious man, I suspect, but one does not even really need to know that. It is imbued in his work already. He could paint an apple and give you a vision of GOD. And in this one, The Sparrow’s Song, he conjures up a religious experience extraordinaire. Who holds a bird on their hand? Now, come on! None but a Saint, like Saint Francis, could be so free of guile that a wild bird would rest fearlessly on his hand, or her hand in this case. And the Artist who paints this? Like another Saint not even in the picture. Is that his hand on the Bible? Or on a mere Moleskin sketchbook with the telltale band of black elastic stretched around the cover? Well, let me tell you, in the artist’s world, there is no difference between the two: His Sketchbook is his “Bible.” So be it. 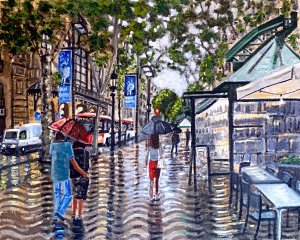 Here ya go, another masterpiece. Anyone who has been to Barcelona will know the Ramblas. It is a central tree lined and shop lined boulevard where people stroll, shop, have a coffee, buy flowers for their sweetheart, and generally feel good about life. No, in fact FEEL GREAT about life. For the Ramblas is Life X 1008. This is why people would travel half way around the world just to go there, just to walk there, just to BE THERE.

Robert captures a complex painting problem here, and solves it. It has just rained and the reflection of the water on the elegant waves of mosaic making up the central pavement of the promenade is exceptionally right on. The Ramblas feels just like this, after a rain. In this case during a rain, as the people have their umbrellas unfurled. And the vendors’ stands in the middle of the Ramblas are there—just like they are. I can almost smell the rain, the dampness, the warmth, the smell of the flower shops, the anticipation of the lovers walking. God. Robert takes me into it. I am right there, loving it. 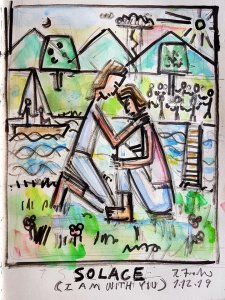 There is a Babaji picture we have with the caption, “I AM WITH YOU.” It is penetrating. The Peace of GOD gives us Solace. It is like saying, “I AM WITH YOU.” This drawing says it all. Many of us get into a funk. And some of us, not in the funk, are the only ones who can lift those we love out of their funk. Sometimes it works, sometimes it doesn’t. It just depends how attached we are to our funk. “Truth cannot deal with errors you wanna keep,” Sondra Ray says.

In the end, this is why we are here, to give each other SOLACE in this wild and complex world. Robert knows the heart ache of a funk. He also knows that to get out of it, you have to give something to someone else. You have to “Offer Solace, to Receive It.” This is a basic law. He knows it. It is obvious. He draws us into Solace, literally. Who cares if these are “stick figures” with “block heads?” We get the picture. And will not forget it. 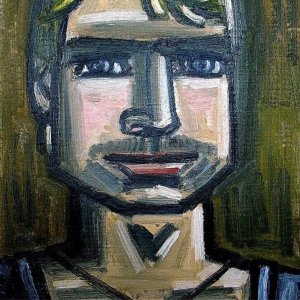 I will leave you with this one. A Self-Portrait—Robert has this as his profile picture on Facebook. I love it. So “block-head” of him. But perfectly right on. When you see a photo of Robert, this painting looks just like him, and captures perfectly his main features. Kind of a high brow, pouty lips, deep blue eyes of a “nordic gaze,” chiseled jaw. It’s all in there.

I suspect Robert and I will “get along, little dōgie” for a very long time. I would feel honored to hang a Robert Froh on my walls. Look into him you guys, and support this dude however you can. Buy his work and transform yourself. Remember the Chinese saying of their great painters of Coy—”In order to paint a fish, you must first be a fish.” So it would follow, in order to paint a Saint, you first have to be one. This painter’s heart os OPEN. You can walk right in there.

PS. If money was not a factor, and I had the millions to buy a David Hockney, I would rather have a Robert Froh. He has the X Factor. He is touched by the Holy Spirit in his painting, and we don’t even know what hits us in the first glance. But it does hit us. His painting lifts us into etheric realms. Hockney does not do this. Hockney leaves us floundering in the worldly realms, wondering if we will ever have rich friends with swimming pools in their back yards. Robert takes our hand and leads us into a world beyond the body, a light around the body, a “block head” of the Christ that looks like Howdy Doody. I would take a Robert Froh any day over a David Hockney. I would venture, once you really look at him, you would too, you discerning “Art Lookers.” 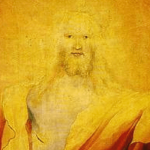