Allow 3-4 weeks for Shipping. (Orders outside USA subject to additional shipping costs.) For International Orders, inquire at contact@markusray.com for estimate.

I painted this Babaji ICON in Saint Paul, Minnesota. What is the purpose of an ICON? What is it anyway? There is such a thing as an iconoclast. That is a person or movement against icons, or the abolishment of a particular form of iconography. Some people think ICONS are a thing of the past, collecting dust in some distant Orthodox church in a remote Russian town where the local religious fervor has been dead for a long time.

In India there are statues called Moorti’s our Murti’s. They have the living presence of the deity depicted, and they are treated in a reverential manner. They are a type of ICON.  But what about the Western world? Icons such as the Last Supper by Da Vinci, or the David by Michelangelo, are still seen by millions. But are they seen as historic relics of great bygone mastery, or do they live and breathe, emitting the spiritual blessings from the moments of their conception?

The works I paint of the Master are a kind of ICON. Why not? They are also a kind of Murti, to imbue the living presence of the Master, which can later be accessed by the one looking. Who is faithful enough to see this living presence, and trust that it can be invoked for help and consul?

The “iconoclasts” would call this “idol worship,” I suppose. But I know people who have had miraculous things happen as a result of owning my paintings of the Masters. The ICON depends on your attitude towards it. If you view it is a reverential way, and connect with the mindset of the Master who is depicted, then I would say it is useful to get into that vibration of the Master. If you are not really connecting with its essence, but use it as an empty object of belief, then I would say it remains an idol.

Here is a related Painting, Babaji in Italy, that you may ponder as an icon:  BABAJI OF ITALY 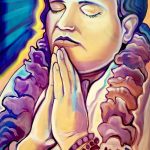 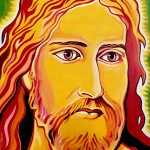