We are up here in Iceland, where, on this “Nordic Hawaii” of volcanic action, I have been contemplating Viking Art. My mind is vaguely recalling the intertwining tracery of intricate woven patterns of geometry, intermixed with simple animal and human figurines making various mundane, as well as glorious gestures.

I know these people were serious seafarers. In modern Iceland, the fishing industry is the biggest (tourism is the second biggest). So this sea relationship is paramount. Generally the Golden Viking Age was between the late 8th century through the 11th century, and encompassed the peoples of present day Scandinavia: Denmark, Norway, Sweden, Finland, and Iceland. We have notions of Viking marauders zipping around the North Sea in dragon-prowed ships, raping and pillaging the local peasantry, and scaring the shit out of Early Christian monks and nobles. Perhaps not far from the truth. They were a fierce set of characters.

OK. So they sailed around the known and unknown world into places unimaginable. They even started a settlement in Newfoundland, about 500 years earlier than Columbus is touted to have “discovered America.” The Vikings did “discover America,” long before the Italian explorer did in 1492. And they sailed all over Europe as well. Look closely at the extent of their travels on this map, and one can fathom the extent of their influence on Medieval Art all over the European and Indo-European world.

Vikings did not build big cities and large masonry castles. At least not until the later part of the Viking Golden Age, when they converted to Christianity and became part of the Catholic Church. They travelled light and lived in simple stone and earthen huts. They lived along the coastline, and boats and fishing were their way of life. Adventurers by nature, they did not fear to venture out into the open seas in uncharted waters. When one looks at the imagery in their runes and art work, this meandering around the globe is exemplified in their free flowing intertwining of lines, twirling hither and tither, criss-crossing and interlocking into a unified tracery of unbounded linear exploration.

There is a “woven together” kind of feel. Delicate forms snake around and “bite their tail.” What’s this all about? Strings form knots and knots form elegant compositions. We are mesmerized by the over and under trails of curving bands— around and around like the wakes of conquering longboats. We do what we do best, and the Vikings sailed the seas better than anyone else in the Nordic World at the time. So, they ventured out and took what they wanted. They were fierce enough characters to do so.

The mid-Urnes Style would stay popular side by side with the late Urnes style of the runemaster Öpir.[18] He is famous for a style in which the animals are extremely thin and make circular patterns in open compositions.] This style was not unique to Öpir and Sweden, but it also appears on a plank from Bølstad and on a chair from Trondheim, Norway.

The Jarlabanke Runestones show traits both from this late style and from the mid-Urnes style of Fot and Balli, and it was the Fot-Balli type that would mix with the Romanesque style in the 12th century.

What possessed these men toward such intricate interwoven tracery? Something of the interconnectedness of Life was upon their aesthetic of the good. Legs and necks of mythic animals curve over and under in a basket of inextricable weaving. As though once in the grip of the Viking Life force, one cannot escape the animistic facts of this natural existence. One feels bound up in this weaving, but at the same time liberated into a kind of beauty of being a part of such and intricately beautiful and symbiotic thing. The world of the Vikings was one of tightly woven interdependency.

This ship, found in a burial mound at the Oseberg’s farm in Norway, has all the beauty of design exemplary of Viking shipbuilding in the 9th century. Ship building had risen to a high craft. And this enabled the Vikings to take to the high seas and discover, trade with, and raid foreign lands.

Seafaring was integral to Viking Life. And the interesting thing is these large ships of high born families were buried with the deceased, along with servants and farm animals. The Oseberg Ship was such a one, with two ladies found buried along with it. An older woman is assumed to have been a Queen, or an important Shaman for the clan, and the younger one her servant. Often these servants were sacrificed and buried with their masters. Also precious objects were buried with them as well, much like the Egyptian nobles took their useful things with them to the afterlife.

Carved along the entire length of the prow of this seaworthy ship is a “gripping beast” motif. Intertwined along the spine of the ship, it lends a sense of potency, protection, direction, and homage to the elemental forces that are at play on these forays into the vastness of the sea.

It is no doubt the Vikings were marauders of the British Isles including Ireland. In Ireland, they were the actual founders of the cities of Dublin, Wexford, Waterford, Limerick and Cork. The Celtic traditions of art, including the Book of Kells, and delicate objects of gold & bronze, with colorful cloisonné, were clearly influenced and intertwined with the Viking swirls and interlaced designs of linear and serpentine configurations.

This “bucket Buddha” is indicative of a spiritual side to these Nordic Conquerers. The four “swastikas” represent an affinity to the four directions of the universe, and four of them in a quadrant breast plate, indicate the Vikings’ aplomb at going out in any direction, protected by their connection to the natural forces that make up their world view. It is interesting that this meditative figure would be infused into Water, atop a water “bucket,” the medium of oceanic proportions that made the Viking culture a purely seafaring one.

On the raids in Ireland starting in the late eighth century, the establishment of Viking communities were to share influences that can hardly be denied. The famous Book of Kells is full of rune-like intricacies of interwoven designs, as seen in the Viking carvings of the late Urnes Style. This interconnectedness of life in a kind of aquatic swirl is indicative of this method of design throughout the entire Nordic world, no less with the Celts than with the conquering Vikings.

What Can Be Surmised?

There is an invisible world of energetic tracery made manifest in the Viking / Celtic pictorial nomenclature. Why do you think these people were so obsessed with this elaborate complex of interlaced and intertwined compositions? The Celts used them extensively in their early Holy Books manuscripts. The Vikings carved them into standing stones and into the elements of their Long Boats and small metal objects.

In the Northland of the Viking world, which set sight on the oceanic life-style of fisherman, explorers, and highly adventuresome conquerers, the sea of infinite possibilities filled their minds with a joy for the unpredictable meander. The watery swirls and the serpentine intertwining are like the course of a ship with no direction home. The real home of unlimited possibilities is somehow given to us instead, through these interlocking traceries of over and under bands, along with the watery swirls of tightly packed waves of Viking fate.

We are in Iceland now, at the heart of this Northland of Viking origins. The Iceland Vikings were more literary. What stands out are the sagas, written records of the Viking Golden Age. Their fate was to face the entanglement of unpredictable meanders of conquest and exploration, but at the same time stay the course of a highly cooperative communal life. A page below is from the Njáls saga from Möðruvallabók. The sagas are a significant part of the Icelandic heritage. The scribes of these sagas probably operated much as the scribes of the Book of Kells—in a reverential manner for the truth of their highest aspirations. In these did the Vikings ascend to Valhalla, over the rainbow bridge to an immortal place in the history of this present Icelandic world. 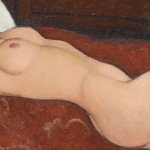