It seems that we have to look toward cultures not our own to find a reverence for Mother Nature that transcends the need to conquer or exploit it. Such a culture exists in Bali.

We go there every year in December, and take a group on the Bali Quest. This is the first year in over a decade that we will not be going, due to the Great Sequester and the travel restrictions still making journeying that far uncertain. Indonesia is on the other side of the globe from Washington D.C. That’s a long way off in the distance!

Looking through my photos from former trips is as close as I will get this year to Bali. I am a bit sad about this. We have gone every year for the past ten years. Yet, once the essence of a place has entered one, it is hard to say if it ever really leaves you. And this is true about all powerfully charged Spiritual places, Bali being one of them—it’s presence permeates your very blood after you “take it in.”

There is a large Public Park on the edge of Ubud called The Monkey Forest. It is like it’s name, full of wild monkeys. They have become quite tame over the years, and even bold. But they are revered by the Balinese, so there is more than a zoo-like quality of the place. Since there are no cages or roped off areas, the monkeys can often be right in your face, literally, looking for a banana or something flashy you might be carrying in your bag. They can even be quite grabby.

Taking a stroll down Monkey Forest Road in Ubud, just up from the Monkey Forest itself, one gets in touch with this special monkey reverence. The kind I mean is actually a form of worship for the Balinese. Being basically Hindu in their religious beliefs, the mythology of the Ramayana plays out heavily in their art and Life. Hanuman, the Monkey God, is a very prominent hero in that story, which I need not go into in detail. (That is another Art Look.) All along the road are sculptures of monkeys. They are so delightful.

You could say, “Well, a lot of cultures anthropomorphize animals, totems and pets. So what is different about this?”

There is certainly an anthropomorphizing happening here, but can we look deeper at it? Rather than monkeys imitating human qualities, could it be that we are imitating monkey traits? Are these monkey sculptures not a commentary on our common primate tendencies, perhaps even the best of them? Could not the Monkeys of Ubud be showing us something about ourselves?

Every twenty feet or so on Monkey Forest Road there is another sculpture of some Monkey in action, amidst even the real ones about to steal some goodies from the open bag of an unsuspecting tourist. This fellow is intent on barreling down the road on his Vespa. It is more than just a comic relief of sorts, but a kind of sanctum decorum of the sacred streets. One is forced to consider the cohabitation of humans in the midst of a natural world bigger than ourselves, and also its Divine Motherly benevolence in its absolute care for us.

TRUE MOTORING WITH THE MRS.

I love this particular monkey sculpture I have dubbed True Motoring with the Mrs. It is so indicative of the Balinese. They take a scooter everywhere, most often with a wife or family member in tow, riding behind. The Mrs. is carrying a basket offering of fruit, which is so indicative of Balinese life—they are constantly making offerings to the Gods.

This sculpture itself has received some daily offerings. The marigolds at the base were offered by some reverent Balinese in the morning, most likely to Hanuman.

Nearly all the Monkey Sculptures show some affection. Amongst themselves monkeys are very touchy-feely, often clinging affectionately to one another in a gentle embrace. These sculptures are very accurate to capture their primal bonding nature.

Here is a Mother Monkey nursing. She has a presence. Her little guy is sucking away, quite content. What could be better?

These Monkeys seem to be having some kind of swirling good time. Are they meditating in a Buddha pose? Are they on the beach amidst the waves? It’s a bit mysterious what they are doing. But whatever they are doing, they are totally into it with a passion.

One thing is for sure, Monkeys like to hang out together. They are communal creatures, and very family oriented. They like their villages, groups, and make social bonding a priority. They would probably be very good on social media if given a chance.

I will end on this Balinese painting, typical of the style that depicts an incredible melding of the natural world with the Deified World of a holy connection. Everything creative seems reminiscent of this natural sacredness in Bali. From the walk through the Monkey Forest, to the cavalcade of Monkey Sculptures on Monkey Forest Road, to the depictions of godlike figures intertwined in a dance of divine delight in the colorful Balinese paintings—the purpose of life is to be happy and honor the Divine.

The Monkey is a God, and God is a Monkey. Need we look any farther for a reverence beyond our western disconnection from the sacredness of a natural life? The Balinese have much to teach us, as most indigenous cultures do. Who is more primitive here—the ones who can build a 100 story skyscraper filled with offices galore for thousands of workers divorced from their natural elements, or the ones who can pick marigolds and sculpt monkeys on main street? 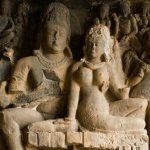 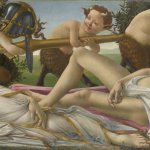