VERROCCHIO AT THE NATIONAL GALLERY

Andrea del Verrocchio, born Andrea di Michele di Francesco de’ Cioni, was an Italian painter, sculptor, and goldsmith who was a master of an important workshop in Florence. He apparently became known as Verrocchio after the surname of his master, a goldsmith. —Wikipedia. Born in Florence in 1435, by 1488 he was dead, in Venice, while working on an Equestrian sculpture commission at a ripe old age of 53. But the scope of his influence was vast. He had a workshop that apprenticed some of the greatest painters of the Italian High Renaissance. Such greats as Leonardo da Vinci, Dominico Ghirlandaio, Sandro Botticelli, Filippino Lippi, and Pietro Perugino were among his “boys.”

I did not need to go far to see his genius, as the National Gallery had a small but comprehensive show of his work just recently. I walked up there, as usual, to soak it in. It takes me 33 minutes from door to door, passing by the Capitol, meandering around the Library of Congress, and slipping along the Mall just past the Native American Museum.  It was a brisk but sunny winter day. I was elated in a kind of an Art Trance. 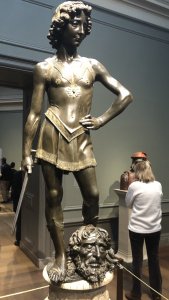 I was shocked in a good way when I entered the first room from the east court of the National Gallery. I met face to face with Verrocchio’s David—having just chopped off the head of Goliath, in a kind of perfect, nonchalant contrapposto. The ultimate, “What, me worry?” certainty of Verrocchio comes through in his subject, and captures us, transfixed—all the way back to that Biblical moment of triumph.

Come on now. Does that face look like it just went through the “battle of his life” with the evil forces set against him? It is angelic. It is remarkable. It is uplifted with victorious elation—not because of his conquest over Goliath, but because of the Divine Connection that puts him in a constant state of inner peace and certainty. The goodness of David is transcendent in this quintessential sculpture of Verrocchio. Another one of his “boys” defines the greatness of 15th Century Florence and its influence on the psyche of Western Art. 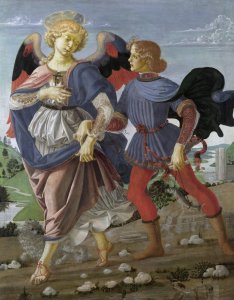 VERROCCHIO’S TOBIAS AND THE ANGEL

Tobias and the Angel

There is the beginning of an action in Verrocchio’s treatment of the human figure. Not a static or stiff icon frozen in a kind of perpendicular straight-jacket of the Medieval era, the figure in 14th Century Florence,  in Verrocchio’s world anyway, was a living, breathing person doing stuff. He put his “boys” in flesh and bone and beautiful integration of muscles and veins masterfully depicted to sharpen our vision of what it is to be human.  He was reaching out and stepping across earthly universes to show us the Beauty and the Immortality of Gods in human existence. Gods descended into human form on earth—these figures lift us into another realm of Sacred Reality. I don’t think you could say it was all implanted there in the hearts and minds of the people through an oppressive and dogmatic Church—but it was revealed in the genius of the Artists who put forth the dignity of the human form to anyone with eyes to see.

There is an interaction of holy presence in these figures, walking along the road, hand in hand. Leonardo is said to have painted the fish hanging from Tobias’s hand and the fluffy dog behind the feet of the striding angel. The time and attention given great care to produce this dynamic interaction are brilliantly conceived in these teacher/ student and master/apprentice relationships. Verrocchio had the best set of “boys” any maestro could have. What a JOY it must have been to work in this truly Divine workshop!

The Madonna and Child

The Church’s influence and patronage were inseparable from the output of Art in 15th Century Italy. Yet the rise of the wealthy city-states, and influential families such as the Medici, made art not only a statement of religious faith and fervor, but also a sublime proof of their wealth and influence. The Medici patronized all the major artistic geniuses of the times. Verrocchio was commissioned by them to do portraits and religious works. 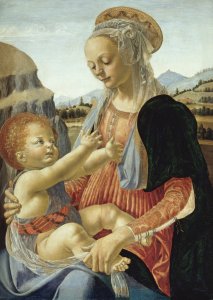 In this touching portrait of the Madonna in the moment, the baby Jesus is reaching for a tighter grasp, and deeper comfort from a motherly embrace to give him solace. This kind of human gesture of human need would have been impossible just a century before. Jesus would have been too iconized to be humanized. But here we can feel Him, as one of us, with human attributes. It makes Him accessible to us. We are blessed and caressed along with Him by a Mother of Absolute care. 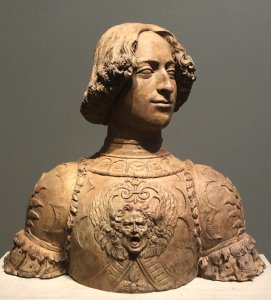 Not since the Roman times had patricians of community and state been elevated to the level of Gods. Immortalized in this sculptural bust, Giuliano de’ Medici, one of the most wealthy patrons in Florence, had his image set in Verrocchio’s mastery. Noble and simple at the same time. it is an exercise his claim to fame, a shouting crest of a winged decree—”I am the Great Medici, from the family who helped define the rebirth of classical art in these modern times.” Another of Verrocchio’s “boys,” Giuliano is added to the pantheon of divine figures who mix visceral grasp of form’s beauty with the presence of a sublime quality of the Spirit.

Christ is his greatest Boy

The boys of Verrochio are not always adolescent adonis figures. This Christ is pensive—eyes downturned. Perhaps He contemplates the breadth and depth of His task ahead of Him, and He is thrown into a kind of obedient resignation to the severity of his future trials. Nevertheless, the boys of Verrochio are to be taken seriously. 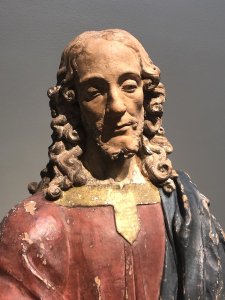 Verrocchio is a master at capturing human emotion—not a kind of pathos or idealized shorthand of emotional emojis, but the feelings of real people feeling real things. This Christ could be the man next door; the neighbor who goes the extra mile out of his way to lend us a helping hand; the friend who would tell us how far astray we have gone, and show us the way back home; the spiritual guide who has not lost His star of needful navigation. 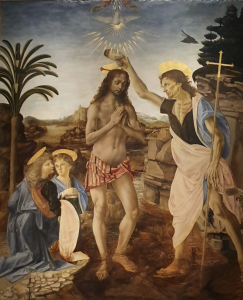 In Verrocchio’s “Baptism of Christ” it is believed that Leonardo painted the angels to the left. Certainly, there are stylistic similarities that confirm this apprentice’s prowess. The space is very human; the angels could be the kids next door. The dynamism of the characters draws us into the scene. Men and boys alike, we are engaged in a drama beyond words. We are touched in the gut by the veracity of the scene. We are in a state of wonder just looking at the details of our own baptism into truth.

‘Beauty is truth, truth beauty,’—that is all

Ye know on earth, and all ye need to know.”

OK. I think you get my point. The Energy of Verrocchio was pure and true, and that produced beauty. Not only in his masterpieces of painting and sculpture but in his human relationships with his “boys”—who went on to be the most celebrated artists in the High Italian Renaissance. We are blessed by them in this Art Look. We are blessed by Verrocchio by the legacy he left behind. 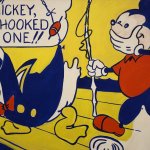 ART IS FOR PEOPLE’s JOYPAINTINGS 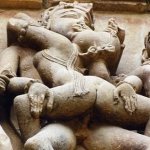 THE ART OF SEXPAINTINGS, SCULPTURES