This Man of Short Life Produced Some Timeless Masterpieces.

There is an order in Georges Seurat’s Dots.

I call this article Seurat’s Dots after a style of painting that uses small “dots” of color to make up the forms that would generally be defined by lines, volumes, shapes, and planes. There is an order in Seurat’s work that captures us in a moment of suspended animation. It is like a “slice of life” that is frozen, stopped in action, held in check by the acuteness of the artist’s observations, and the minuteness of his dotted application of color to define what he sees.

Georges Seurat lived only to the age of 31. He died in 1891, on an early spring day at the home of his parents. He was from an affluent family. His father, at one time in the legal profession, made money—a lot of it—in real estate speculation. Georges, sensitive and gifted, was given a solid art education in various artistic schools and venues around Paris:

Georges Seurat first studied art at the École Municipale de Sculpture et Dessin, near his family’s home in the boulevard Magenta, which was run by the sculptor Justin Lequien. In 1878 he moved on to the École des Beaux-Arts where he was taught by Henri Lehmann, and followed a conventional academic training, drawing from casts of antique sculpture and copying drawings by old masters. Seurat’s studies resulted in a well-considered and fertile theory of contrasts: a theory to which all his work was thereafter subjected. His formal artistic education came to an end in November 1879, when he left the École des Beaux-Arts for a year of military service. WIKIPEDIA

We know him best for his unusual style of applying paint in thousands of tiny little dots. Art Historians refer to this as “Pointillism.”  The theory is that the eye will unify the dots, and blend the colors together into a harmonious whole. In fact, this does happen. In a well organized fashion, we are awestruck by the meticulous order of Seurat’s Dots and of his scenes. 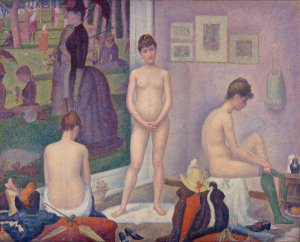 “The Models” by Seurat

This painting of “The Models” was at our beloved Barnes Foundation in Philadelphia, where I reveled in visiting it during my 30 years I lived there. Along with tons of Renoir’s, Albert Barnes amassed one of the best collections of the early modern paintings, rivaling the early modern collections of any other major museum. Now his famous collection is on the Benjamin Franklin Parkway, in its own new and contemporary building, not far from the Philadelphia Museum of Art.

Just so you get a feel for Seurat’s Dots, because his more famous paintings are very large and these pics will not show their close-up details too well, here is a smaller work that shows the fine brushwork of his method: 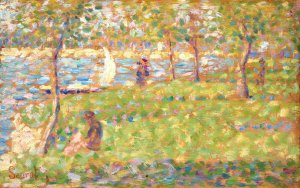 “La Grande Jatte” was his all time masterpiece.

Some feel Seurat’s figures and compositions are reduced down to an inhuman mechanical formalism. He told a friend and art critic that his model for the subject of “La Grande Jatte” was the Parthenon frieze. But Seurat didn’t want to paint ancient Athenians. He wanted to paint the real people of his day, in their own costumes, in a modern way. By “modern,” he used ordinary people as his subjects, and ordinary life, in a kind of “cavalcade” of figures placed in a frozen pictorial slice of his own, late nineteenth century, Parisian era.

“La Grande Jatte” was purchased by the Chicago Art Institute in 1924. I saw it there myself on a visit. It is daunting in scale, over two meters high and almost three meters wide. One can almost step into it, into a different time and place.

The bourgeois Parisians went to the Grande Jatte along the River Seine on Sunday afternoon for a stroll, and to be in the cool shade of the great trees along the river’s edge. Two thirds of the painting is either in shade, or depicting the foliage that makes the shade. It is clearly a “procession of the people,” as Seurat intended, of the affluent side of town: women in their fine clothes; men in their top hats; a man with a commodore’s hat plays a trumpet; a woman with a bustled dress and parasol leads a pet monkey on a leash. People are relaxing in a very curious fashion. All are painted in a kind of atomic build up of painted particles, exploding on the scene of a Parisian leisure class. 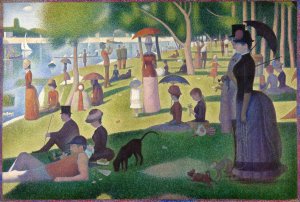 The more common side of the river.

Prior to the completion of “La Grande Jatte,” Seurat had painted another scene along the riverside called “The Bathers of Asnieres.” This scene, on the Left Bank, more commonly associated with the working class of Parisians, was equally potent in his orderly and serene depiction of a relaxing moment in time. The factory smokestacks in the far distance are in conjunction, and in contrast with the intense light of the scene.  The smoke pouring out of the stacks is a kind of foreboding of the industrial age, and the two World Wars which were yet to come, that changed Europe, and perhaps mankind itself, forever. The boy in the middle contemplates the respite of a time of leisure, into a fate yet unseen. 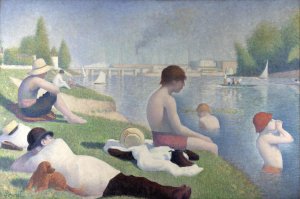 “Bathers at Asnieres” by Seurat

Seurat’s Dots get us ready for things to come.

Seurat died on March 29th, 1891. He passed at the end of an era, yet not quite established in the new era of the tumultuous 20th Century of artistic revolutions. Like many of the late 19th century painters, he gave us a hint of things to come. Making the paint the subject as much as the scene depicted, he assisted in the great liberation of paint from photographic display. The photograph could do that now, quicker and more accurately. Now the painter, like the composers of music before them, could delve into the purist forms of their medium and compose a visual symphony, as it were, in paint.

Music and theatre would play a strong role—and even the more unusual theatrics of the circus. Seurat’s last painting, some say unfinished, is The Circus. Figures seem to defy gravity, and the use of scale to create a deep sense of space comes from the three layers of foreground, middle ground, and background—the harlequin, the acrobats, and the spectators, respectively. There is a harmonics in Seurat’s Dots. He brings us to a place of stillness, almost suspended animation, in which we put together all his elements into a decisive whole. We connect what he has taken us so far to see, and lets the natural forces of human perception complete. 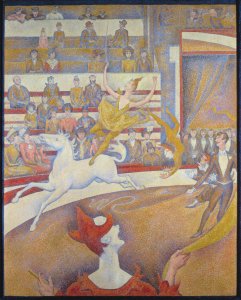 “The Circus” by Seurat

The things to come would be  cataclysmic. At age 31 this genius, Georges Seurat, checked out. Things were astir. Painters were stepping out of the confines of realism into the world of pure paint. The Dot was gaining momentum. Kandinsky had not taken his forward steps as yet. Braque and Picasso were still formulating their movements toward cubism. Matisse and the Fauves had not yet come. But as Kandinsky said, “everything starts from a dot.” Seurat’s Dots were upon the scene of modern painting, and would assure their place in the evolution of this ancient communication mode of picture making.

Check out the ART LOOK STORE: 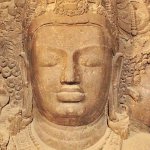 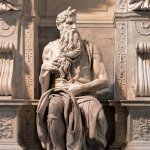