RALPH WOEHRMAN : Fire of Love as One of My Teachers

I spent my early formative years studying Art at the Cleveland Institute of Art in University Circle of Cleveland, Ohio. It was a gray city. Some places you have been in your life have an ominous mood—a pervading temperament that defines not only the place in your mind, but also your experience of it. I spent 7 years in Cleveland from 1973 to 1980. Most of what I learned in art school I had to unlearn later—and realize that some small fire of love, some spark of creativity was always in me, regardless of the expertise the keepers of the culture of high art in institutions tend to wield.

One of my professors said that art schools rely on the prodigious labors of the students, and the implied expertise of the instructors. Well, implications were dismissible by me in the end. I would have to find my way, anyhow, through my own prodigious labors. I would have to light my own fire of love in myself, regardless of another older artist’s expertise, implied or actual.

Lately I made contact with one of my art instructors from the Cleveland Days: RALPH WOEHRMAN, who helped ignite some of that fire in me.  I had him for a creative drawing class, and also for a printmaking class in lithography. That was over 40 years ago. I recall Ralph as one of the best of my instructors who did the least damage to his students. By this I mean he imposed the least of his views onto my modus operandi, which at the time of being an undergraduate at the CIA, was very unformulated. By 1973, when I began to attend the art school, Ralph had achieved some notoriety as a master draftsman. His large portraits of historic characters like Lincoln and his cabinet members, juxtaposed with surrealist imagery, was indelible in my mind. His work possessed the fire of love for his craft, for his medium. He has mastered it thoroughly. 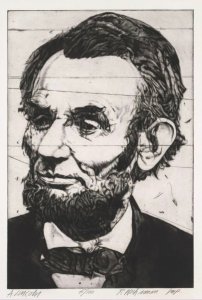 This intaglio print (etching, mezzotint, and probably some engraving thrown in there) showcases Ralph’s expertise over his printmaking craft. Not since Albrecht Dürer, in my eyes, did a printmaker have such facility. There is a dynamism in Ralph’s work. Though a historical character, we seem to be able to touch him, Lincoln the man, in this immediate moment of his tragic gaze. What the man must have endured inwardly in the four years of human carnage in order to abolish the institution of slavery is beyond our comprehension. But the bittersweet grief is all over his face, and Ralph captures it.

Young Bob Dylan is juxtaposed with an “eye chart.” We are left to make our own associations. Bob Dylan is the “visionary” and the eye chart tests our vision. This is a drawing on a large scale. Larger than life.  We are asked to let the subject in. An iconic figure, but also very human, palpable, touchable, real, with a tiny ladybug tattoo on his cheek. This is where Ralph asks us to ponder the unexpected—but how unexpected is it, this day and age of anything goes? One could end up having a ladybug tattooed on their cheek and we would hardly make any fuss about it. 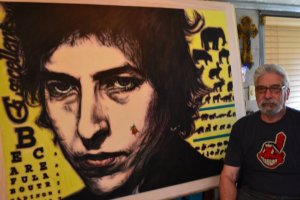 Can you fly upward in Ralph’s work?

When I spent my years in Cleveland, Ralph Woehrman was drawing large scale pieces that depicted moth and butterfly subjects. This one has a Bird of Paradise bloom superimposed over the butterfly. The color is spectacular. Both Ralph and I studied with another Cleveland Institute of Art master, Julian Stanczak, who was a colorist extraordinaire. Julian’s geometric color abstractions were probably the most profound in the art historical context commonly called “Op Art.” This school of painting used the close relationships of color to give us the impressions of a potency and vigor of color’s interactions with each other, as well as with our inner responses to these interactions. 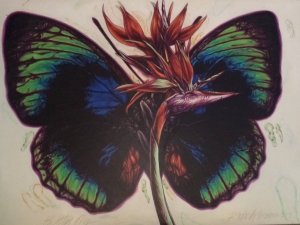 Butterfly and Bird of Paradise

What does this color of  yellow green swatches next to deep indigo, and ultramarine bluish blots of the wings, held together with the tracery of deep magenta drawing, hovering behind the redish cyan petals of the fluttering flower do to us? How do we feel in our gaze of this flying form, caught in a clip of frozen presence? Keep in mind this drawing is about five feet wide. Most likely twenty times larger or more than the subjects in real life.

But what is real life? In fact we probably see more of the nature of the thing in Ralph’s drawing than if we saw the butterfly fluttering through our visual door. Frozen in an elegiac requiem, these pictures are a kind of elegant lament. Beautifully constructed, and a kind of compost layering that brings life to the dead, brings joy to the sad, and brings an acute understanding of form in an otherwise flurry of figures too fleeting to notice. Ralph puts our face in it, and makes our impressions permanent. He resurrects our visual soul. He sets us on fire for the passion of painting pictures, especially of the human visage. 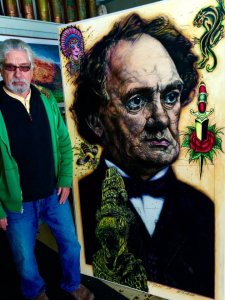 This portrait of P.T. Barnum who made circus fame is associated with “American Tattoos.” I asked Ralph what got him into Tattoo imagery and he said this:

I find them intriguing. I find them repulsive as well. I never desired having one,—they’re indelible, permanent & final!

Well, then I wrote him this:

Yes. My wife had a skin graft on her leg. It left a swatch of white skin. So we had a rose tattoo put over it. Sometimes they are functional. They seem to have become part of the worldwide culture. 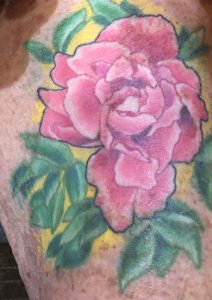 An artist seeks the indelible, the permanent, and the final. Especially a painter. Ralph Woehrman is an artist of the indelible and final. We are going to look at these things for a very long time. Abrecht Dürer is still being gazed upon five hundred years after his indelible marks and grooves of engraving were made. I suspect Ralph’s “Tat’s” will weather the erosion of time, and be indelible as well. We will look upon them and ponder the associations of our days. We have become a tattooed culture. We are imprinted with indelible programs and markings, Facebook profiles and Instagram promos in which the ephemeral is given permanent status. Our identities as souls are superseded by images of ourselves tattooed on social media. For better or worse. 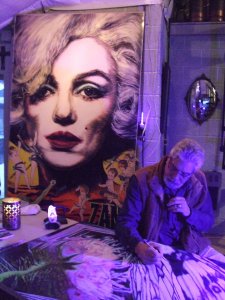 Marilyn and Ralph Woehrman in his studio

“The Medium is the Message”—Revisited

Ralph’s figures are tragic, sometimes comic—darkly so—but never tentative. They are permanent and final. Perhaps like the fine art of printmaking, they are inked in with an indelible medium pressed upon our psyche. They are put in the black light of our modern day scrutiny of the medium. “The medium is the message” is a phrase coined by Marshall McLuhan, suggesting the meaning of the message is highly influenced by the form of the medium used to convey it.  How the message is transmitted through the medium is almost as important as the message itself, and how we perceive it in our life. A printmaker at heart, Ralph is used to the blackness of ink, and this medium transfers over to his message. There is a kind of Germanic attention to detail and a blackness of permanency issuing forth from his inky messages—tattooed messages upon the dark night of our soul. But they bring a glowing coal of fire to that night. They bring a necessary heat to an otherwise frigid winter. 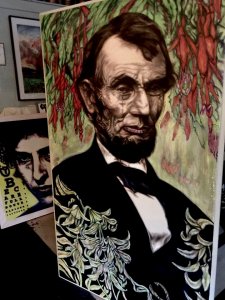 It is a renewed contact I have with Ralph Woehrman,  like I said. Forty years plus in between our last sentences and pictures praised. I cut my artistic teeth at the art school where Ralph taught, and went through my creative childhood and growing pains there.  There is something in the air in Cleveland, over on the lake, Lake Erie, possibly “eerie” with no pun intended, and indeed a psychic darkness in its gray winters of discontent. Sometimes I wanna ask myself to “lighten up” about the whole thing. It was not a happy time for me.

Yet, we are more than the sum of the tragic and the comic, and we are somewhere in need of transcending the medium. Revisiting the work of Ralph Woehrman, I can see my technical simplicity, perhaps even naiveté, held up to the standard of the Cleveland Institute of Art obsession with prodigious craft. At some point I left the medium and embraced the message. The medium can’t get us there—all the way. It gives us an exquisite embellishment of course, and even the beautiful with which we may engage and unite. But in the end, we are not defined by the exquisiteness of our indelible marks and tattoos.

We are permanent souls having an impact on our living mediums of exchange. We are responsible for the Message. What we convey, especially with the skill and prowess of a master craftsman, is the art of living. As artists of Life, not just mere paint, ink and formal veracity, we still need to consider the well directed Message. Love is the Message here. It is the Medium and the Message. Perhaps this is  a note of a request to my Master Teacher—for whom I have the utmost respect: a picture of innocence and Joy without any need to tattoo a demon designed into our notable presence here on earth. It’s just a request—not detracting from Ralph Woehrman’s mastery, which far exceeds the norms of formal skill. It takes tremendous Love already to produce his kind of work. It’s a worship in itself, albeit leaning toward a dark side of the mildly macabre that clouds over the Cleveland doldrums of disposition.

The Fire of his Love is pulsing through Ralph Woehrman’s work. He was one of the best things, along with Julian Stanczak, that happened to me in my Cleveland years. I will forever be supremely grateful toward him and his mastery of the medium. And perhaps in our future exchanges we will transform and affect each other’s Message. May we dedicate the skills of our Medium to intensify the fires our Love that warm our hearth of Heavenly realms on Earth.

“Babaji of Curitiba : The Fire of Your Love” by Markus Ray 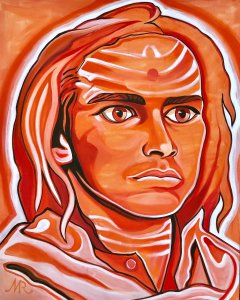 Babaji of Curitiba: The Fire of Your Love by Markus Ray 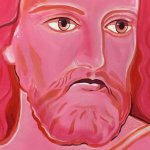 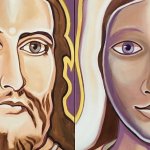