Babaji is in Love with Paris

If you have to paint, paint it in Paris. You could say New York is the current art capital of the world, or not. You could say Rome is the center of the Western Art Renaissance, or not.  You could say LA is a force to be reckoned with, or not.  But Paris has undoubtedly the vibe of all art vibes. Geez oh man! The place is pre-eminent with art and beauty with a capital “B.” Everywhere you turn the aesthetic beauty is overpowering.

I decided to paint a BABAJI in FRANCE for my friend Monique here in her apartment in Nueilly sur Seine. We went and got the stuff I needed in town, and I began in a non-assuming way, as I always do, to let the thing unfold. I started out with this: 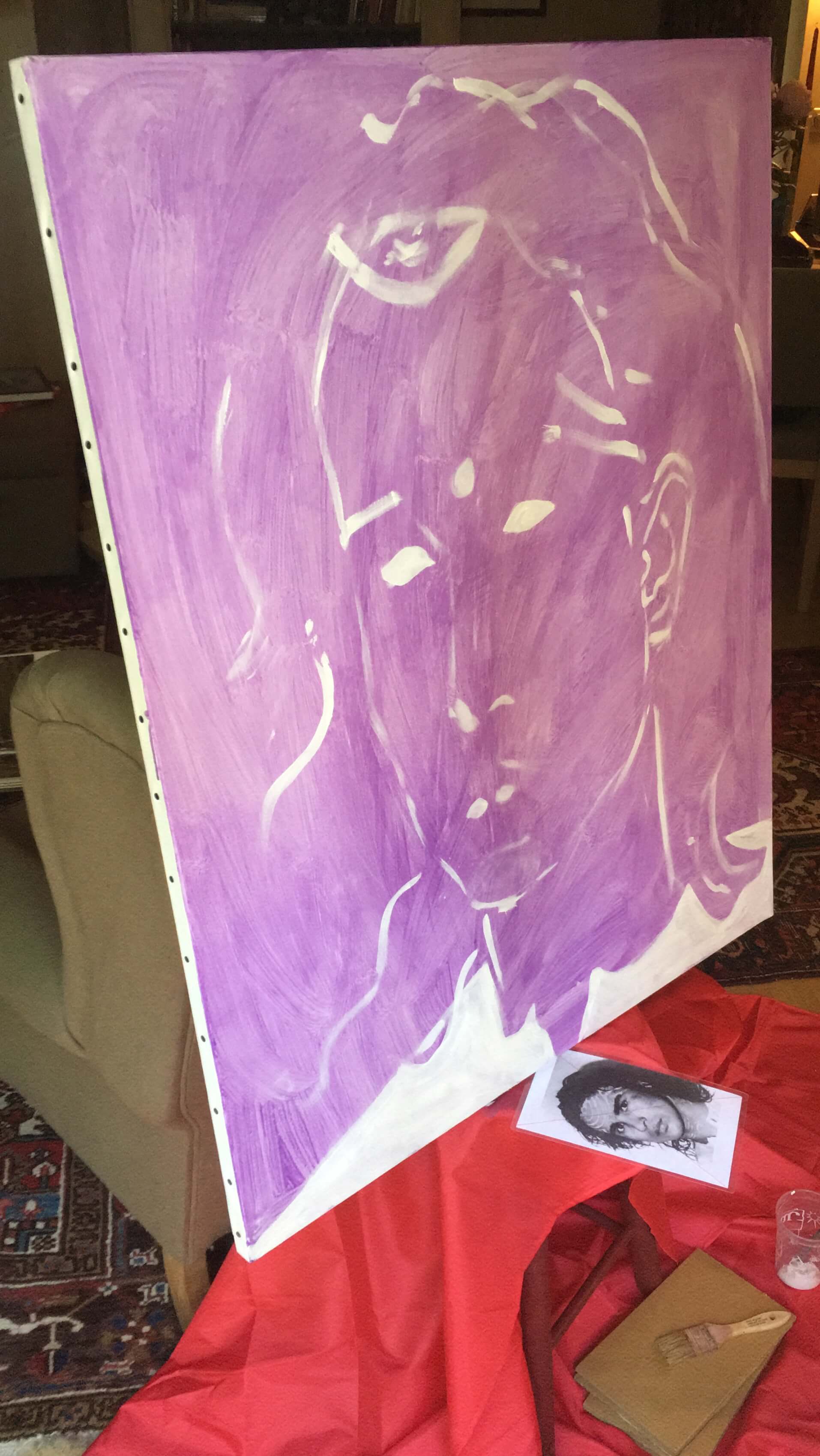 These initial strokes turned into this:

I added some orange and then painted over the whole canvas with a more magenta glaze. You gotta do something bold (and somewhat destructive) if you are going to paint Lord Shiva, which is Who Babaji is. 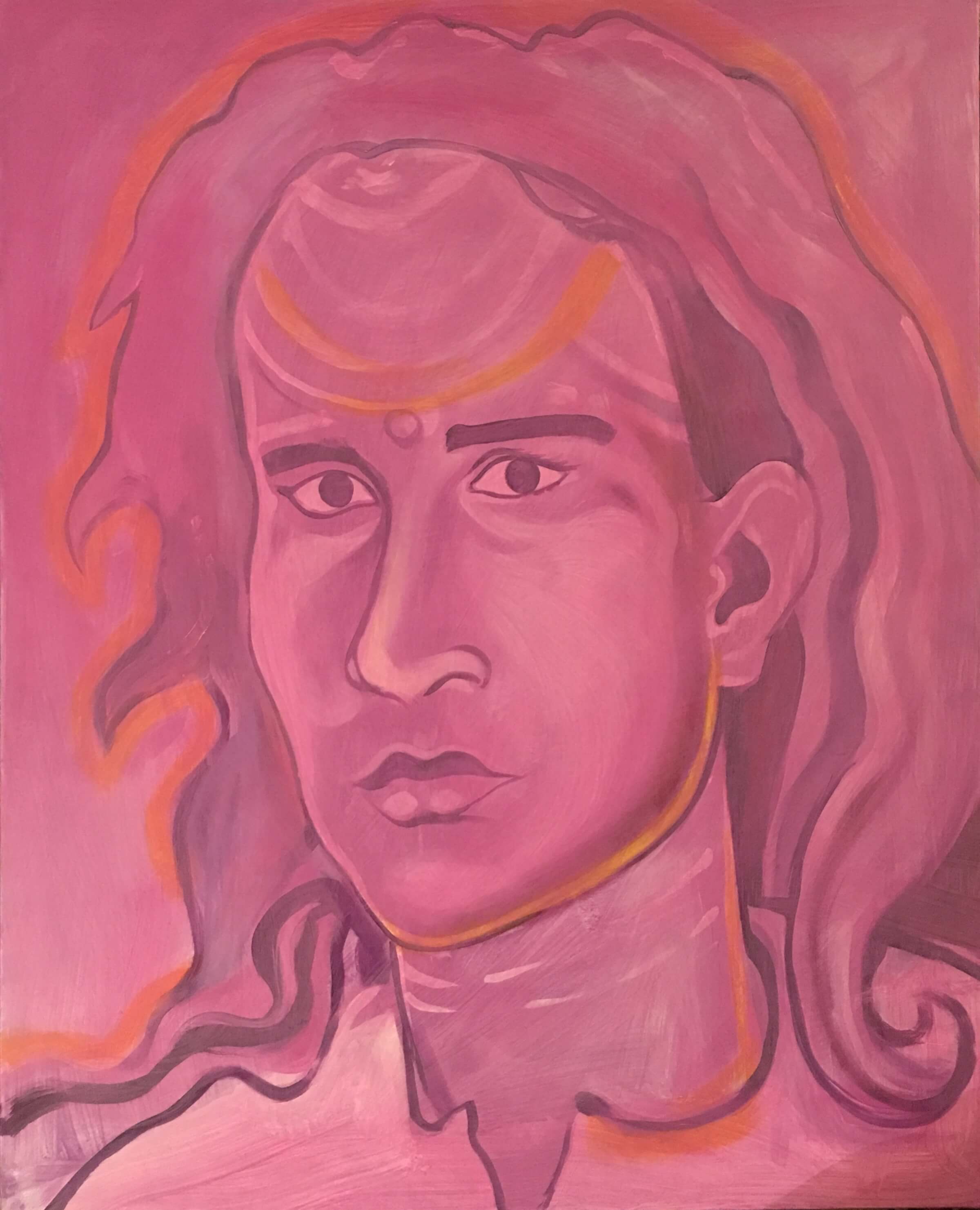 But then I had to adjust the shape of the face. I did not like the left side, and the eyes were too close together. So I painted out the eyes and moved them father apart: sometimes one centimeter makes a meter of difference. I brought the thing back to a more purple tone with another glaze. 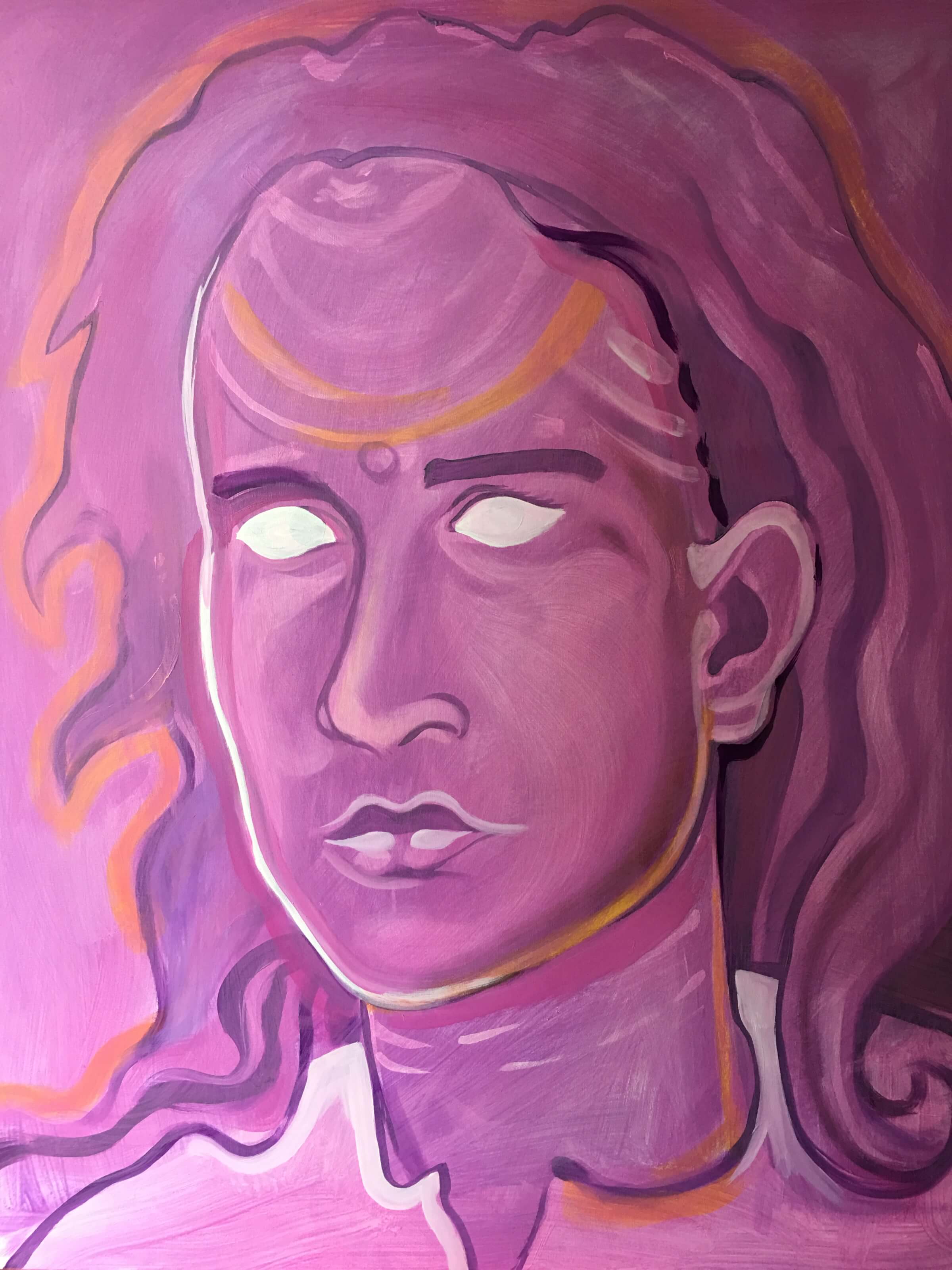 I added some orange too, and then I wrote this on my Facebook:

“Picasso said a painting is a series of “creations” and “destructions.” That is true. Everything you “add” to a painting “takes away” the former relationships and forms new ones. Every time you “paint over” a section and restructure, you have created a different painting all together, and destroyed the former painting.

For me every painting goes through this inner transformation. The vision may be simple, but the means themselves, the very strokes and decisions of which paint, which color, which density, and so forth, have a direct effect on the “vision.” In some ways I “paint blindly” of the final outcome, not knowing what it is to be.

Through a series of actions, with my Will to touch upon something impactful and true, I arrive at something new. Sometimes this process takes courage to obliterate what I have already spent time to create. But if I am attached to my “investment,” then the thing stays stuck. Nothing new at all. Only the copying of my own style.

One would not think that “imitating ones own work” could be a major pitfall in the creative process. But if I am honest with myself, I have to be willing to do something bold and thoughtless. Not calculated and controlled, to breathe new LIFE into a work.

I will share my process with you in the BABAJI in FRANCE. Here is the first bold destruction. Awkward. I feel kind of vulnerable exposing myself this way, but let’s see what happens. I have 4 more days to work on this.”

By the time I got the hair adjusted to where it was dynamic, and not just sitting on a dummy head like a wig, it was time for a “halo ring,” I call it. 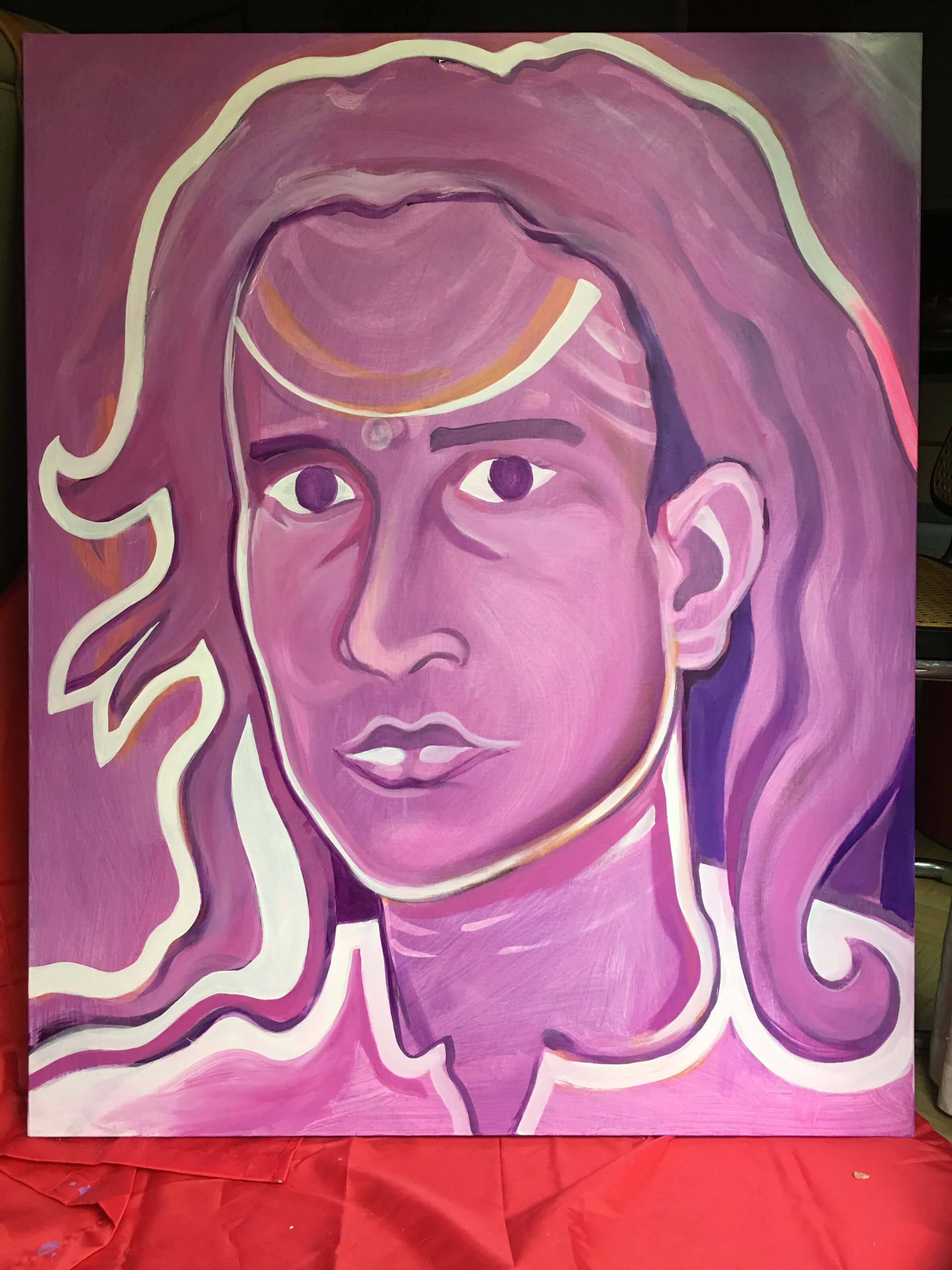 Then we took a break for a couple days and went to Vezelay to see the Basilica of Mary Magdalene. That was a total mind stopper. I was in the total bliss of the French genius by then…. filled with the Spirit, as they say. I had French limestone on the brain, and was still trying to find my way, flowing with the right colors for Babaji.

After we went to Vezelay, I was swamped with Frenchdom. I had to put some “fleur de lis” in there somewhere, for heaven’s sake. I stuck a few in the background. Why not? They were the symbol of French Royalty, and Babaji is certainly a KING!. And Royal Purple just kept coming to me. Babaji loves everybody, even the French. And certainly He was awakening my own Love affair with the French in myself, like NEVER BEFORE!

What a week here in Paris. Here is the final BABAJI in FRANCE, and I think everyone would agree it was worth going through the week long metamorphosis to get to it. 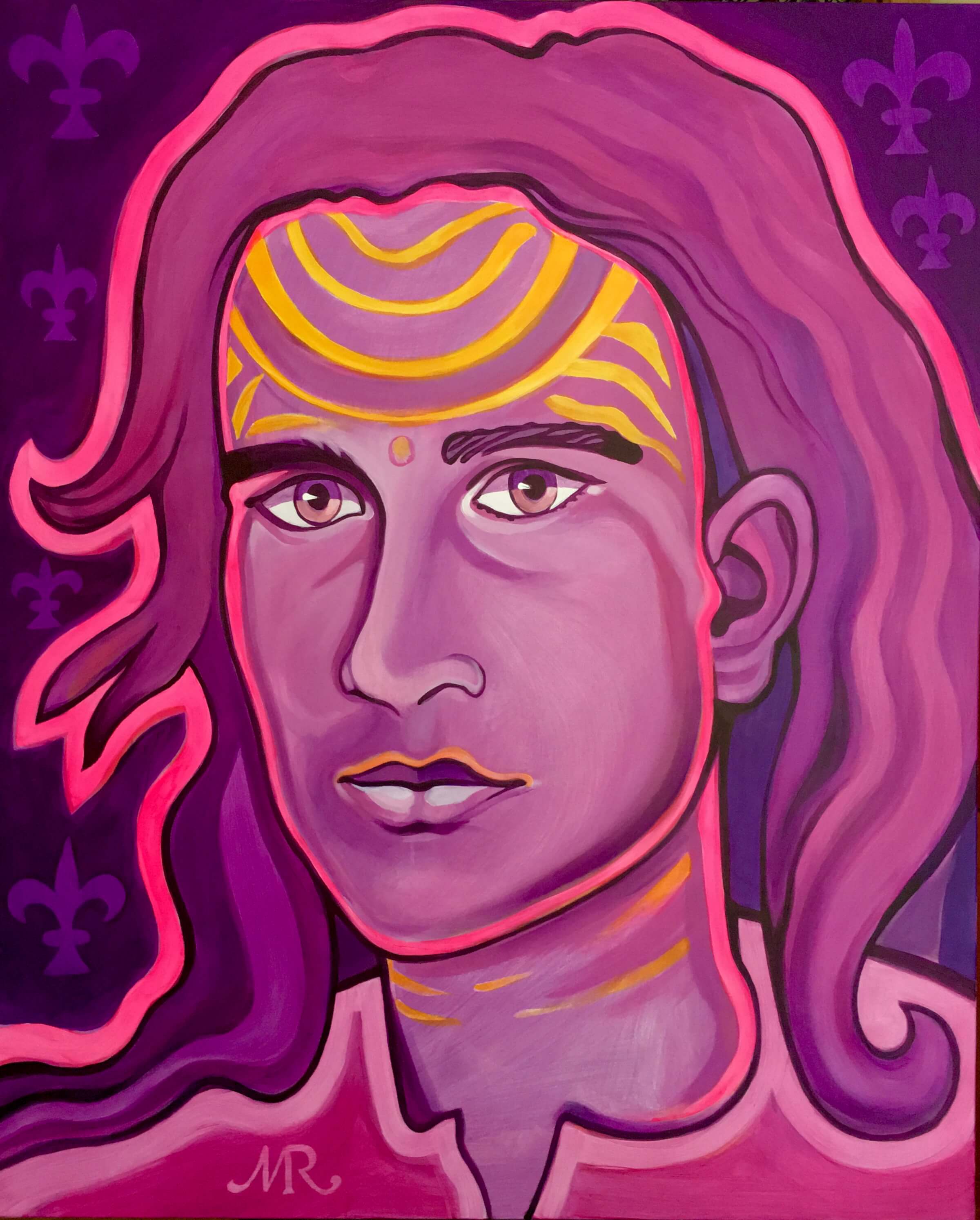 If you have to paint, (which I do or I would go mad,) paint whatever you have to paint in Paris. The vibe will help you and your art. It will blow your petty mind, and give you a Royal mind. It will push you around and knock you down a few times, but pick you up in the end and give you the shining glory of the Painter Gods on your side of your Facebook timeline. Give it a try, even if you are an artist in the bud, or a mature one like myself.

PS. Anyone want one, let me know. Have paint brush will travel, or ship. markus.ray@aol.com