Moses of Israel was captured in all His glory by Michelangelo in Rome.

My relationship with Moses of Israel all started for me in the Prayer Room at Tara Singh’s Foundation in Los Angeles. Taraji had an extraordinary connection to Holy Beings. Never had I seen so many of Them depicted in the most authentic ways in one place.  One felt Their Presence, just from the sheer integrity of the man, Tara Singh, to bring together such a unified field of truly Enlightened Souls.

When one entered the Foundation, one stepped outside of time into the realm of the timeless, and these Holy Beings did well to represent that extraordinary Vibrational Space. It was concentrated mostly in one room, simply called the Prayer Room. A couple dozen life-sized portraits of them encircled the walls. Their Presence created a vortex so strong that one’s mind became “erased” almost instantly upon entering and sitting down on a meditation pillow. 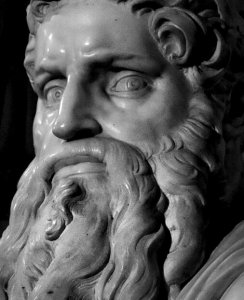 There was a powerful picture of the face of Moses, by Michelangelo. This photo does not fully capture the one at the Foundation, but it is close. I could feel the Power of Moses through this photo, dramatically lit in black and white, with high contrast shadows. The beard streamed down like rivulets of Divine Force, falling toward a tired earth, yet to lift it up through the Faith of Moses and His Holy Convictions. The man of certainty came through this photo and I made contact with Him, as well as with others in the Prayer Room. But especially with Moses.

Years later in Rome at the Church of San Pietro in Vincoli….

Years later Sondra and I were on our European Tour presenting our seminars, and one stop was in Rome. We were staying near the Colosseum, and I discovered that Michelangelo’s Moses was nearby in the Church of San Pietro in Vincoli.  It was a few blocks away from where we were staying, so we just walked over there to see it.

I was stunned by its Presence. First of all, the subject Himself is formidable. Such a character, a Prophet, who could pull down the forces of God and receive the Clarity of Vision that would create the Law, and bring order and freedom to a whole people. He was the Great Liberator. We all know the story. He was put in a basket by his mother and sent down the Nile, to avoid the systematic slaughter of Jewish boys by the Egyptians, (about 1500 years BCE.) And then he was found by the Pharaoh’s daughter floating around in the bullrushes. She took him in and raised him as her own, in the royal court. 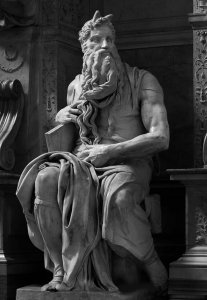 But Moses saw the mistreatment of the Jews as a young minister of the Pharaoh, and wanted to do something about it. He sensed his affinity with them. After killing a cruel slave-master, Moses fled to the wilderness. There he learned of his roots, and was told by God to free his people from Egypt, and take them to the promised land of Israel. And this he did, as we all know: He parted the Red Sea; took his people out of Egypt; received the Ten Commandments; wandered in the wilderness for 40 years, and finally brought his people to Israel — the Great Liberator he was. He was attuned directly with Divine Forces, fulfilling his destiny and awakening the potentials of a true human being.

Michelangelo captured Him in all His glory. This was sculpted as a part of a larger tomb of Pope Julius the Second, completed in 1545. More grandiose plans were abandoned, and this figure became the central focus of the tomb sculptures. It is probably the most accurate depiction of Moses we have in the realm of artistic depiction of this very real and heroic person.

Sondra and I went to Israel in 2013 to teach the Loving Relationships Training. We were hosted by Raanan Gidron. As a preparation, I was drawn back to this remembrance of Moses, and I did my own drawing of Him (in my own style) to give Raanan as a gift of our appreciation for his work to bring us there. 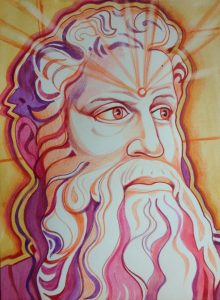 The rays that were depicted in the sculpture as “horns,” I converted to “rays from the bindu,” the point of the third eye which represents “spiritual sight.” I painted Moses in the hues of Orange, Yellow and Red. He was a fiery figure from a time in history requiring great inner strength. To stand up to the “mighty Egyptians” required a courage beyond the normal — and Moses had that. How else could he have actually done what he did?

In the LRT in Israel I painted Moses of Israel again.

I painted Moses again while Sondra was teaching the Loving Relationships Training.  I took my time, and used acrylic paint on canvas. Because I had done the drawing before, my hand was well tuned to the shapes and forms I needed to paint. The drawing flowed effortlessly, and the color flooded across the canvas like a bright sun of liberation over the horizons of a dormant night of murky green. I was immediately grateful for Tara Singh for introducing me to the Real Moses.  I could feel him in my strokes. 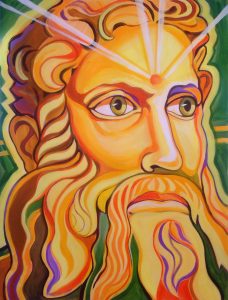 Painting Moses awakened me to ancient potentials in myself.

I felt “commanded” to paint Moses. It was as if life prepared me. First, with my unexpected meeting with Him in the Prayer Room of Tara Singh’s Foundation, and then again in Rome at the scene of Michelangelo’s genius, and then again in the heart of gratitude I had for my time in the Holy Land of Israel itself.

Moses became real to me. When I painted Him, ancient potentials I did not realize I had began to awaken in my Soul. I was attuned with the Holy Spirit that pulsed through our veins, mutually. What does a Prophet have that we do not have? Nothing really. The only difference is that we have a lot of other stuff: fear, doubt, uncertainty, self-interest, and other impurities. They have worked these out of themselves, and have ONLY the will of God in their hearts and on their minds. I was able to work these out as well, and rise to the vibration of Moses, at least while I was painting Him.

I painted Moses of Israel and got closer to that purity of my own Self that I knew was there. I painted Moses of Israel and got one step closer to the Liberation of my Soul. Somehow in the painting, I dropped the confines of the slavery of littleness, and moved into the Glory of my True Self — that God intended me to be — living my full potential as a human being, and as an artist.

You can Purchase a Giclee of MOSES OF ISRAEL: CLICK HERE 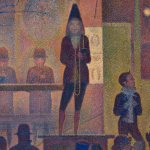 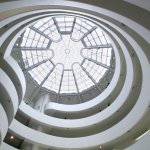