MY PAINTINGS OF BABAJI

My obsession with painting Icons has gone on for a dozen years. Traces of it existed before, but when I married Sondra in 2009, that was the focus—the Spiritual Masters. So this became my principle subject matter. And Babaji, of course, was the Master I painted the most in those first few years.

These two works I painted in Medellin, Columbia. There is something very charged in the South American atmosphere that is very conducive to painting Icons. Maybe because like the Iberian Peninsula, South America is predominately Spanish or Portuguese speaking, and also Catholic—both cultures that revere the Icon in their churches and holy places.

The Guru is Effulgent

When we depict “Enlightened Masters” we usually associate them with some kind of Light. Rays of light emanate from within the person, and we are lifted into another dimension of awareness by their words, deeds, actions, or mere Presence. This is the purpose of a true Icon: imparting this light through the image of the Master. The Guru is “one who brings the Light,” and He or She is effulgent.

Sometimes one just has to go for it with a painting. You get the thing almost finished and it still remains somewhat lifeless. Then a little voice tells you to just do this or that, and it freaks you out because if it works—well fine—but there is a good chance all the work done up until that point will be destroyed. And you will be holding the bag with a big mess in it.

In this case of “Babaji with Rays” I put the rays in at the very last. Then I had to paint back into them to meld them into the solidness of the face, while keeping them with the feeling of transparency. A little more difficult than painting a “solid” object. But I think I pulled it off. The gamble paid off and it made for a much more powerful Icon than I started out with. Babaji came forth effulgently.

Babaji of Adelaide was painted in Australia. Down south, the landscape is very dry. These colors seemed to be appropriate for the climate Down Under in the summer months. Parched and earthy. This is Babaji in a turtleneck sweater. I had a lot of fun painting the yarns of the turtleneck.

There were painters who painted Babaji with much more realism as to his actual looks. I am not after that. I am after an “essence” of a Presence, not a photographic likeness. Sometime Babaji is a bit intense, kind of “in your face” with a gaze. I consider these paintings an actual Darshan. A Darshan is an encounter with the energy of the Guru that enters into you and transforms you. This is the purpose of a true Icon and it is my purpose for these paintings of Babaji.

I painted this Babaji in Auckland, New Zealand. Someone told me He looks sad. Perhaps He is sorrowful because of the plight of many who come to this earth and suffer, never escaping the misery of existence. Perhaps He is just feeling the weariness of the day, and I was in a jet-lagged mood flying all the way to New Zealand from the USA when I painted Him. That is often the case—how I feel when painting the Icon determines the final mood of the painting.

I painted this Babaji in Wagga Wagga, Australia. Wagga is about halfway between Melbourne and Sydney inland by a couple hundred kilometers. It is a hot and dry place too.

One of my absolute favorite paintings I did of Babaji was in Austin, Texas. It is very interesting that the climate and terrain in Texas is very similar to that in Australia. I do well, painting Babaji in these dry, arid places. Sondra and I were teaching an LRT in Austin, and as was customary, while she was teaching I would be painting off to the side. People loved to see the work emerge, so I always felt connected to the group, even though I knew and they knew this was a silent exchange happening between us.

There is a fluidity in this painting that Sondra really likes. It was “put down” in an effortless motion. I hit the “sweet spot” quite easily and without any struggle. Someone attending the workshop from Houston bought it right off the easel, so to speak. It remains one of my best paintings of Babaji, and perhaps one of my best paintings of my whole painting life, which approaches 50 years.

Another painting I painted in Texas was also purchased right off the easel. It adorns the cover of the book we wrote on this Holy Master—Babaji: My Miraculous Meetings with a Real Maha Avatar. I painted this one in Houston.

I painted many Icons of Babaji in Europe. One of my favorite ones I painted in the Italian Alps in northern Italy. We were giving an LRT in a retreat center north of Lake Cuomo. A lady from Japan was attending who bought it. I used colors in the Italian flag, red and green.

How many hours I must have spent in front of a canvas pondering the face of Master Babaji. It feels like there is no time in it when I am engaged in the action in the present moment. It is the most natural movement when I am in the middle of it. Only when I look back on these images in time do I get a sense of the importance of my dedication to the Icon in general, and to Babaji in particular, as well as the amount of time and energy it took to paint them.

Painting Babaji has been my way of connecting with Him. There is a Chinese saying, “In order to paint a fish you have to be the fish.” This always stuck in my mind about painting the Spiritual Masters. I would have to be applying their teachings, and know them intimately, in order to be able to paint them effectively.

The red Babaji above I painted in Denmark using the colors of the Danish Flag. The simplicity of it was balanced just right. The drawing was falling exactly in the right place. The one below I painted at home in Washington. Some of my friends said it looked like Babaji in “wood grain.” This is is for sale. Contact me if you would like to buy it for your home Altar. It is 30″ X 40″ in size.

I would like to close with Babaji of Curitiba. I painted this canvas panel as one of the Dream Team, with Amma and Jesus forming the other members of the triptych. There is something very direct about this one. I feel He gazes toward God. There is a facility that is simple, but at the same time has a depth. It is from the same image of Babaji I used to paint the Babaji in Northern Italy.

You could commission a Babaji painting for yourself. Or one of these could be made into a giclee for you. Some are on my website: STORE Please write to me at markus@markusray.com if you are serious about a purchase.

Thank you for meandering through with me on this journey of Icons. May you receive Babaji’s many blessings. 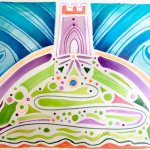 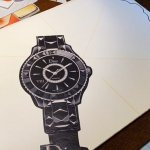 THE EXQUISITE NOWPAINTINGS, WORKS ON PAPER