We had an Exquisite Day here in Washington two Sundays ago when we saw Corot’s Women at the National Gallery.  But firstly, I apologize for the gap in the Art Looks. I have been focused over here editing a book proposal for our agent who is representing us for our new book on Physical Immortality, and also preparing another manuscript for publication on Amazon: Lately I’ve Been Thinking by Sondra Ray. You can’t imagine. You may think getting these Art Looks together requires some eagle-eye editing—multiply that by a thousand when one is writing a whole book. And even then, typos sneak up on you and bite you in the butt! (Endlessly, it seems!)

BUT WHAT I REALLY WANT TO SAY is Washington is Exquisite on Sundays. And every day is a Sunday for us, a holy day. On Sunday, September 9th,  we went with our good Washingtonian friend, Maureen, to the National Gallery to see the Camille Corot show: Corot’s Women. It was truly exquisite. And then we went to the Trump Hotel for High Tea (now don’t be making us wrong for doing that, because it is one of the most expansive lobbies for High Tea in Washington. And Sondra Ray loves crème brûlée, of which they serve one of the best!) 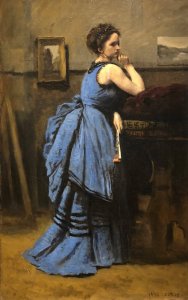 It was a rainy day. We took our umbrellas and made the best of it. We found parking on the street where we could, across from the National Archives, then scurried into the National Gallery from the far West entrance to get out of the downpour.  We then meandered through the Early American furniture section, up the grand staircase to the unbelievable Rotunda, then down past Jacques-Louis David’s Napoleon out of the corner of our eye, to the East Garden entrance of the special painting exhibition of Corot. Phew! We made it unscathed@!

COROT’S main “Woman” was his Mother.

I am always a bit envious when I read about artists whose family supported them hands down in their craft. Corot’s parents were prominent dress makers in Paris, and they had a high society clientele.

Emotionally, he was an affectionate and well-behaved son, who adored his mother and trembled when his father spoke. When Corot’s parents moved into a new residence in 1817, the 21-year-old Corot moved into the dormer-windowed room on the third floor, which became his first studio as well. Wikipedia

He was the middle child with two sisters. In other words, the adored son. When one of his sisters died at an early age, he was even more adored, and his parents gave him a stipend of 1500 francs a month to support his painting career. And that he did, from the 1820’s until 1874 when he died of stomach disorders. 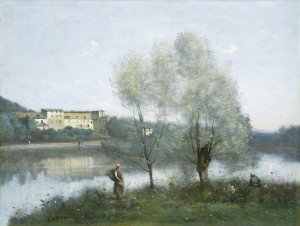 When I was in graduate school in painting at Tyler School of Art of Temple University, one of my professors, Roger Anliker, made a statement I never forgot.  It was about the use of “green” in a painting. He referred to it as a difficult color. Because we see so much of it here on the East Coast, where deciduous forests abound, we are kind of “sick of green.” When you think about it, green is a difficult color. When is the last time you wore a green shirt? Maybe on Saint Paddy’s day just to be compliant and politically correct.

But then, Roger said in his infinite painting wisdom, “But Corot’s green—now that’s a different story. Corot knew how to use green.” There you have it. Look at the green above, for which Corot became widely known. It is a kind of greyed down photographic green, one that seems to meld into the mist, and coat the canvas with a patina of the out-of-doors. Corot was a plein-air painter before painters even began to paint outside in the open air. He was a pioneer of this approach to placing himself in the very landscape he was about to paint. Very few painters did that before Corot. And many after him did, including Cezanne, Pisarro, Monet, and the other greats of French painting, perhaps more widely known. 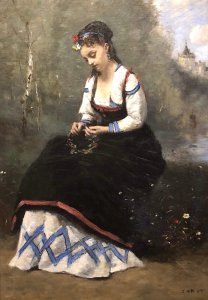 Corot was the master of understatement when it came to color. He had an aversion to shocking color,  “sharply diverged from the up-and-coming Impressionists, who embraced experimentation with vivid hues.” Wikipedia

In this painting of a woman in a traditional peasant dress, we are almost starved for the small brilliance of the blue X’s on her dress, and the band of peachy ruby red of ribbon, edging the deep black velveteen skirt. Then back to the dull green that is so unoffensive in the background of the landscape. Corot placed his women in a kind of 19th century earth tone of acceptable timidity. Beautiful and sweet, yes, in his depiction of acceptability, but not cataclysmic on the scene of artistic license being taken by his later contemporaries to push the edge of painting itself to new vistas of the possible.

They have that 19th century innocence that goes along with a patriarchal submission. Idealized, yes. Yet it was Corot’s mother who ruled the roost and made the fortune from Parisian society gals who clamored for her latest fashions. Corot never married. Perhaps his Mother was enough. And all of the upper-class women who passed through her door gave him ample models for his idyllic depiction of the gentler sex. 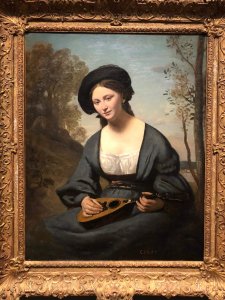 But Times, They Are a Changin’

And the legacy of Corot, quite out there in the open air of idyllic scenes of post neoclassicism, painted amidst his exquisite Sundays of dull green, was about to give way toward the 20th century of total tumultuousness. Cézanne would struggle toward his motif. Van Gogh would put colors together in strokes of paint never before seen. Gauguin would traipse half way around the world to bring back the brilliance of the south seas. Picasso and Braque would dissect the painting process itself, and blow away the world with a sophisticated primitivism. All this was about to explode, while Corot was plodding along in the new morning mist of a slate green plein-air.

This painting struck me as a foreshadowing of Cézanne: 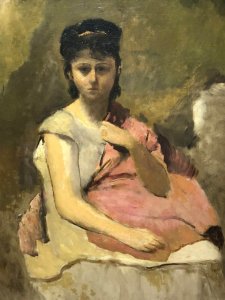 The women in his mother’s dress shop were his models into the Parisian gentility, but there was something astir, especially in this very painterly portrait in all its raw glory. Suggestive of a choppy, almost chiseled out surface so prevalent in Cézanne, Corot sets a groundwork from which the new movements could spring forth. He provided a kind of lull before the storm, a kind of home-spun idealism of the mothering female maiden who would lull her children to sleep at night, before the tumult of artistic revolution about to take shape in Parisian late nineteenth century, early 20th century European culture.

It was good to see Corot’s Women—not as idealized or refined as Bouguereau’s women, but nevertheless retaining a nineteenth century classicism, perhaps even realism, of some very basic painterly lessons.  I walked out of this exhibit on that Exquisite Sunday afternoon a better man, and a better artist with eyes more wide open than before. ART LOOKs are worth it. I am grateful to share. Where they are taking me, I follow the lead to what comes forth into my milieu. We are in a great place here in Washington, and starting Wednesday, we will be in Pasadena for a week. I hope to take Sondra Ray to the Norton-Simon Museum of Art there, or to the Huntington Collection at the Huntington Library. Gainsborough’s Blue Boy at the Huntington is about to undergo an extensive conservation process. We shall see.

All well here in Exquisite Washington. Thanks for reading.

Don’t Forget you can purchase a work to support ART LOOK HERE. 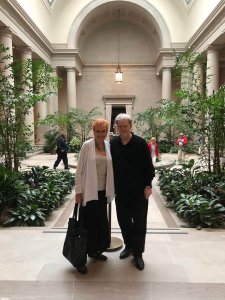 SONDRA and I at the National Gallery, East Garden 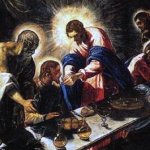 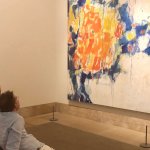