A couple months ago Sondra and I went to the National Gallery here in Washington and saw an exhibition of Paul Cezanne’s portraits. It was stunning. Strongly considered one of the first to take  freedoms in his work we now call “modern,” he has a different relationship to paint and color than his predecessors. What would this be? He doesn’t shy away from putting a swatch of color in a bold way to enhance the Color Life of the painting, even if that color in not visibly there in his flesh and bone model. The painting takes precedent over the model. Color infiltrates into the overall subject itself.  The subtle swatches of turquoise and yellow green on the face of this Boy with Red Waistcoat are not out of place in his Color Life. 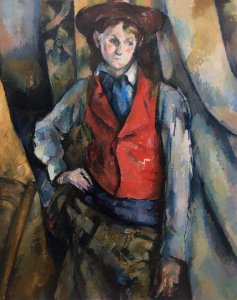 Drawing is the “structure of the Color Life.”

The drawing of Cezanne is anything but tranquil. It seems he fought for every square inch of ground on the battlefield of his canvas to win the essence of his “motif,”as he called it. DAMN, hardly ever satisfied, one could be driven by the passion of discontent, which he was.  But the willingness of Cezanne to “do battle with himself” was the final impetus for his genius. The drawing is well balanced in the end, but no one would call Cezanne’s forms photographically accurate, or even anatomically refined. But the fact is, we don’t care. The paintings are so captivating as a drama in paint, as a Color Life that sticks in our visual memory, we encounter them as the peaceful residue of a war well fought and won.

Drawing as we know it is the cutting out of form. Shape and line define drawing more than does surface and color, the concerns of painting. Common to both are shade and light. Yet, in a painting, drawing is essential as the skeleton of the work. If you don’t have that right, the whole thing collapses into a pile of disconnected bones. Even Color Field paintings such as Rothko, Newman, Poons, and Olitski rely heavily on the “drawing” of a space within the edges of a rectangle that contains them. So drawing in painting is inescapable and essential.

Onto this skeletal structure of form enters the etheric: COLOR. And if it enters well, the painting has a Color Life. Now we are talking about relationships that define life, and make up life. Light and shade play a monumental role. In Boy with Red Waistcoat the light orange-ochre forming the triangular top of the drapery in the middle of the left edge, repeated on the left side of the boy’s hat, and used again on the loop of drapery in the upper right corner, brings out the the Color Life of this painting. Why? Because it gives the Red Waistcoat more force, more authenticity to shine. We love the Red hardly knowing it is “set up” with the orange-ochre surrounding it.

One could probably not think of two late nineteenth century painters so diametrically different as Paul Cezanne and John Singer Sargent. The facility of each was unique, but far apart on the stylistic scale. The Color Life of each has a thread going back to the classical traditions of European painting since Giotto. But one was a “modernist,” coming with the inner turmoils of the foreboding modern age; one was a “classicist,” with an eye looking back to the belle epoque of painterly facility that was rapidly passing by.

There is nothing labored in Sargent. He breathes paint with the effortlessness of an advanced artistic yogi. His drawing has a facility no less than Leonardo’s. Not since Fanz Hals did a painter use a brush with such facility, making the rawness of his strokes capture and define the veracity of palpable and realistic form. The Color Life of Sargent is elegant. When the day is done, the painting feels so unlabored one marvels at the hand that could have laid down paint in such a perfect depiction of human form and color. Certainly some supernatural angel of paint must have done it. 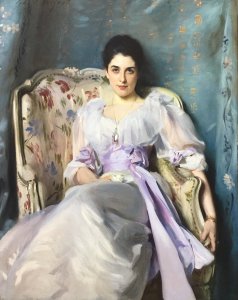 Yet, it was Sargent who did the Divine deed with his acute eye, his impeccable drawing, and his total understanding of turning paint into the Divine servant of a classically refined depiction.   The Color Life of Lady Agnew invokes the angels of painterly perfection to show us the real meaning of lavender. Where have you seen lavender so astutely deployed in anything outside of the fields of the herbs around Aix en Provence in southern France, (of which Sargent was well familiar?) The central color of the painting sticks in your mind and hits you in the heart. From here on out, whenever you see lavender again,  you will think of the gracefully tied sash of Lady Agnew in its shimmering satin glory. 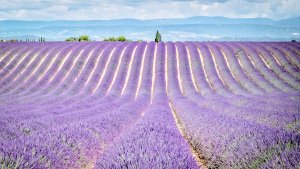 Why celebrate their differences?

Cezanne, the son of a prosperous banker living in Aix-en-Provence, traveled in such different social circles than Sargent. He spent his painting years mostly as a kind of painting hermit, it seems, hunkered down in his studio in Aix. He grappled with his painting like it was the only woman he could get to join him in some  intense but quarrelsome civil marriage.

Sargent, on the other had, was well groomed. His parents of upper class, expatriates from America, came to Europe to lift his mother’s spirits after the death of their first child at age two. They never went back. John was born in Florence in 1856. His father had been a surgeon at the Wills Eye Hospital in Philadelphia, highly respected in his field, but gave up this career when the Sargent family decided to stay permanently in Europe. From prominent New England families, the Sargent’s lived on inheritance income during their European years. John, due to his exceptional skills as a draftsman at an early age, was encouraged to pursue a life in the arts.

Sargent spent a life in the circles of the upper class. These were his clients. Many were the Jewish nobles of industry. Critics dismissed him in the 1920’s as devoid of anything but superficial content. The “Guilded Age” was over, and the values of Victorian upper class had been bombed away in the Great War. Impressionism, Fauvism, Cubism, and the beginnings of Abstract Expressionism had hit the Art Scene, and the romanticized pictures of the European and American upper class were hardly seen as relevant anymore.

On the other hand, Cezanne was not so concerned with class. He painted everyday life, in a kind of “back woods” of a French pastorale. His people were less identified as individual portrait subjects, but more as “props” for his incessant quest for the “motif,” the melding of touch and form and color into a geo-painterly whole that stood on its own as an object. He painted the peasantry at hand around him. Not so concerned with the realistic depiction of a particular person, his focus shifted to the the use of his subject matter that infused his painting with a apparent reason to be, when the real reason to be was his love for paint itself. Color Life stood on its own. In Sargent’s Color Life, it is superimposed over the hopes and expectations of the privileged classes to be glorified to posterity. 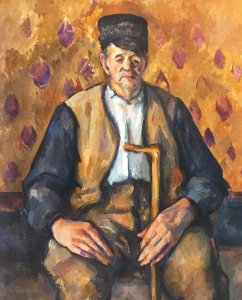 The sense of elegance was always on the mind of Sargent. Beauty to him, perhaps more sentimental and cliche in the eyes of his critics, was harmonious with the good life. And to him, that was classified into the well bred life of the upper classes. Carnation, Lily, Lily, Rose earned him acclaim in England, and was purchased by the Royal Academy after he moved from Paris to London. The scandal inflamed by his painting of Madam X in Paris drove away his clientele. He rebooted in London with a new society of the privileged and resumed his prolific output.

Carnation, Lily, Lily, Rose shows the innocence of upper class children in an evening garden, well lit with lanterns. The Color Life is off the charts. The canary yellows, oranges, pinks, and lipstick reds spring forward at you from the hunter green depths of the garden thickets. Who could say Sargent was superficial? His eagle eye vision translated the scene into spectacular transcendence of the human experience. 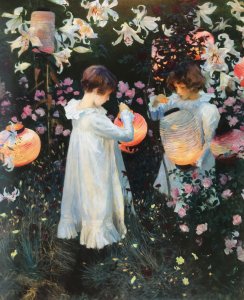 Cezanne versus Sargent. One painted peasants, bowls of fruit, mountain scenes of the provincial world around him. One painted the elegance and refinement of the privileged classes in the cities of Paris, London, New York and Boston, to which his blue blood birth made him privy.

One hacked out his motifs using his brush like a chisel, chipping and sculpting every square inch of his painted surface with the choppy strokes of a laborer struggling over his task. One laid down paint with a facility that seemed more like the natural extension of his privileged class, painting and breathing equally at ease without any effort or uncertainty.

When all is sad and done, the poet Rainer Maria Rilke said this in his Letters on Cezanne :

“There is something else I wanted to say about Cezanne: that no one before him demonstrated so clearly the extent to which painting is something that takes place among the colors, and how one has to leave them alone completely, so they can settle the matter among themselves. Their intercourse: this is the whole of painting.”

Sargent created an equally powerful Color Life. His colors too, “settle the matter among themselves.” Today, his paintings are coming more and more into scrutiny and favor, as he emerges as truly one of our American Masters. His work helped bridge the gap between the immense Western traditions of Art that came out of Europe, from 2500 years of history since the classical Greeks, to our truly American scene. One could say he looked toward the past for this certainty and facility, as expatriates in Europe were destined to do, to bring that facility back to a burgeoning culture in the presence of a new world.

Cezanne, inherently a part of that ancient tradition by birth, looked forward into the abyss of modernism, and it’s embrace of the unknown and uncertain. He found grounding in the common subjects, the natural subjects, the people who would not judge the roughness of his strokes. He found his Color Life in spite of his malaise. And Sargent, already certain of his facility, could move in the circles of elegance and acceptance in any scene.

Madame Cezanne or Madame X: masterpieces in their own right. Their subjects, opposites though they may seem, both are muses to their particular creators for the love of a Color Life in paint. To both we owe a particular, though divergent, artistic homage. 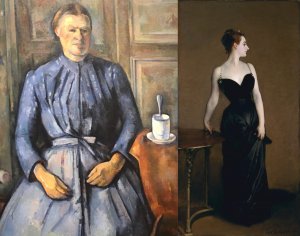 BABAJI in DENMARK. For the full story go HERE. 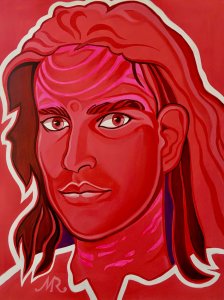 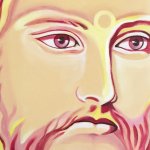 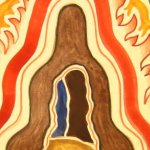