Arshile Gorky immigrated to the USA in 1920, aged 16, after the attempted genocide of the Armenians by the Turks, and after his mother died of starvation in 1919. He had a propensity for painting. He followed it through to become one of the most influential painters of the 20th Century.

The Russian born painter, Vassily Kandinsky, had already hit the Art scene with his “abstractions” from life. He had already published “Concerning the Spiritual in Art” in Munich in 1911. In this monumental work, Kandinsky stresses the inner emotions evoked by a painting, ones that get the spectator in touch with their soul. More than just a collection of good painterly techniques, the painting, and the painter are in a kind of “dance of spiritual communion” that comes forth in the Color, Form, and Composition of the work. And this Composition did not necessarily need to stay confined to the photographic depiction of “objects.” There would be “objects of the soul” in the imagination of the painter who could use his concrete medium of painting and drawing to reveal them.

Back to Gorky now:

In 1941, Gorky married his second wife Agnes Magruder (American, 1921–2013), whose parents owned a farm in Virginia. This pastoral setting inspired the creation of The Liver Is the Cock’s Comb, which reflects both the artist’s physical surroundings as well as his memories of the gardens of his homeland. The complexities and contradictions Gorky felt were present in his own life are built into the layers of this painting. Its title can be interpreted in a variety of ways. In the ancient world, the liver symbolized the soul and passion of the artist. “Cock” can refer to a rooster and is also slang for “penis.” However, “cock’s comb” (or “coxcomb”) is simultaneously a term for a flowering plant, a jester’s cap, and a fool. In ancient Greek mythology, a rooster was sacrificed to the well-endowed Priapus, the god of nature and fertility. Although there are clear allusions to female and male genitalia in the work, overall Gorky’s forms are indefinable.

The sexuality in Gorky’s paintings is implied. But one must gather himself together in this work to absorb the dynamism of the forms and the color. Clearly there is a “garden of earthly delights” going on here―many open Pussys to ponder. And many phallic forms and “stamen of fertility” hovering about, yet to penetrate these pistils of procreation. The imagery may be shrouded in the forms and strokes of color that stay somewhat “generalized” in the garden nomenclature of the artist’s hand, yet the feeling of the painting is one of vitality, fertility, the burgeoning of life on the field of the picture plane.

By Gorky’s heyday, Kandinsky was an old man―but his impact on the future of painting had already been made in his monumental “Compositions.” He passed away in 1944, but the advent of “Abstract Expressionism” was at hand in the studios and minds of the artists in the soon to be flowering New York School. No longer would American painters be beholding to the Europeans for their artistic leads. But Europe’s creative minds would “come to America” before and after the World Wars to be the seeds in this newly planted garden of an unprecedented movement.

Gorky got the best of Kandinsky:

This is what Gorky inherited from the great master Kandinsky. And he ran with it in a magnificent adaptation to his own style, his own hand, his own calligraphic genius. This later work, The Betrothal, is delicate in all respects. It is Gorky at his most refined. the whole composition speaks of matrimony of lines, shapes, colors, and interactions indicative of the sensuality of joining.

You may like this short 6-minute video on Arshile Gorky’s contribution to the art of the New York School. These paintings are mostly from his formative period of exploring the impact of synthetic cubism, surrealism, and constructivism. He is discovering in these works the breakdance of forms―a more lyrical song of pictorial abstraction that was to become his artistic signature and genius.

Like a few great artists, Arshile Gorky suffered from depression and self-destructive tendencies. In 1946 his studio burned down and he lost a lot of his key works. He underwent a colostomy for colon cancer. His wife had an affair with the Chilean painter Roberto Matta. And if this was not enough, in 1948 he was in a car crash that broke vertebrae in his neck and paralyzed his painting arm. His wife left him, taking their two children, which became all too much for him. He hung himself in his Sherman, Connecticut home in July of 1948. He was only 44 years old.

A tragic character? Perhaps. Other artists succumbed to suicide. Gorky’s friend Mark Rothko for one. Vincent Van Gogh for another. Not that self-destruction has any aesthetic merit, nor does it detract from the over-all contribution these great artists made to the outpouring of artistic beauty in our world.

Arshile Gorky was a troubled man from a troubled past, escaping genocide from his home in Armenia, immigrating after the death of his mother to America. Those were trying times―one World War past, yet another looming on the horizon, with a Great Depression in the middle. This upheaval instigated a great migration of talent from Europe to the USA. This shift from the Old World to the New World was inevitable, even for the epicenter of new ideas of the Western Art Hub shifting from Paris to New York.

I will leave you with this last painting that is at our own National Gallery here in Washington. It was featured in a video I made there last January: ART AMBULATION: A WALK THROUGH MODERN PAINTING. You may think Gorky is just a doodlebug. But, if you tried to reproduce one of his paintings, you would soon find out the mastery involved in painting such a thing. Maybe, at last, you would appreciate his genius to integrate so much happening in the middle of the 20th Century. Gorky ascended to the pinnacle of an artistic Mount Everest. He was a beacon of light for artists coming out of war-torn Europe who experienced a flowering of raw expression that was energetic and inevitable. He represented a generation that had been stripped of all civilized reason in wars and hardships of unprecedented proportions, as he rose above them to find that sweet spot of painterly beauty inside of himself. 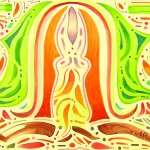 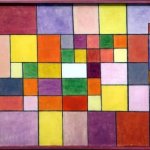