THE FAMOUS AND THE NOT SO FAMOUS

A couple years ago we did some work in Madrid, and as usual I am on the look out for Art. I look at Art. My own, and the Art of others. Being close to Toledo, we spent a day going there, as I was sure about the presence of El Greco in this wonderful Spanish town on the Castilian plains.

Located on the banks of the Tagus in central Iberia, Toledo is known as the “Imperial City” because it was the main venue of the court of Charles V, Holy Roman Emperor in Spain, and as the “City of the Three Cultures” for the cultural influences of Christians, Muslims, and Jews reflected in its history. (Wikipedia)

We easily found the EL Greco Museum. And I was impressed by a series of portraits he did of Jesus and the Apostles. We spent the afternoon taking it all in. This portrait of Christ was one of my favorites.

In an age where people’s faith in their religion was taken seriously, El Greco was fed by the divine connection he felt with the Christ and the holy message of the gospel. In an age where the Renaissance was taking a turn toward a complex extravaganza of the Baroque era, El Greco kept his cool, kept his simplicity, kept his unique vision, and kept his focus on the essentials. He paints this Christ with a certainty of devotion, transmitting the blessing in the gesture of the right hand and the docility of his gaze. We are brought into this avenue of ascension as El Greco guides us into a meeting with the Christ that is authentic. We can feel His presence and lay our questions at His feet for resolution, somehow.

On the same trip I was painting this Babaji in Barcelona. I want people to have a similar directness with the spiritual master I paint. My style is nothing like El Greco’s, but I can appreciate a presence that is the essential emanation of any work of art worth its salt. You tell me if you feel Babaji’s presence in this work.

I wrote in an earlier post on color that my palette favors the reds, oranges, and yellows. With these I would often lean to the khaki green compliment. A Spanish atmosphere would brighten my day and there would be reason for elation. The bursts of orange-yellows and red-oranges, tempered with a moss-green stroke along an edge would get me through my day. Especially on this couple of painting days in Barcelona.

One has to recall the late sixteenth century offered for many a life full of struggle and a dismal reality of toil. A brilliance of color and light coming out of these portraits of saints must have been not only an elevated exception from the everyday glum of existence, but a burst of epiphany offered to an otherwise dismal routine of survival.

There was a looking toward the light. A figure was presented by El Greco gazing heavenward, upward, off in the distance. El Greco himself was very devout, with a daily spiritual life. He was born on the Island of Crete and trained as an icon painter in the post Byzantine style. Crete was a colony of Venice at the time, so eventually he traveled to Venice and was struck by the work of Tintoretto. Before heading to Spain, he also had a studio in Rome for awhile. Ending up in Toledo, he stayed here until his death in 1614.

The National Gallery here in Washington has a few of El Greco’s major works. Here is one of them, “Saint Martin and the Beggar.”

After a day in Toledo we spent a day in a small museum in Madrid. It was a mansion/house/studio of the Spanish Impressionist painter, Joaquin Sorolla. You have probably not even heard of him. I had not. But the residence where he lived and painted was delightful. The paintings I saw were striking and accomplished. During his lifetime he became very notable. He painted somewhat in the style of John Singer Sargent. In fact, Sargent was a good friend of his. He won numerous accolades in prestigious shows in Paris and abroad. He painted in the US, and did a portrait of President William Howard Taft. Some of his most striking paintings are of beach scenes.

I meandered through the house and studio to feel the man. He had a closely knit family life. One can see the interactions lovingly portrayed in the works.

The success of this artist obviously afforded him a wonderful residence in Madrid. The house was majestic. The rooms were spacious. The studio was well lit and large. It was a testament to that Belle Epoch of European nobility before the first world war. It was a golden age of promise. It produced a secular beauty afforded by the spoils of the industrial revolution, but not yet disillusioned by the destructive power of the modern age.

I could appreciate the contrast between Renaissance Mannerisms of El Greco’s Toledo and this light drenched impressionism of early Modern Mannerisms in Sorolla’s Madrid. The brushwork of Sorolla and the colors of light were stunningly beautiful. Not so edgy as in El Greco works. They conjure a pleasantry past the time of the Spanish Inquisition and the dark days of sixteenth century feudalism. If paint could slip into the brilliance of a sun engulfed shore, sea and sand, this Madrid painter would be the hands down master of brushed on illumination. The impressions are palpable.

Sorolla had Singer’s adeptness with the brush. His strokes are perfectly placed. His facility is swift and right on. One can see why he made a name for himself in his own day. Yet, it was more of his adoption of a style that was innovated by other painters such as John Singer Sargent and Mary Cassatt, perhaps more the pioneers than merely the synthesizers of an already existing modern mannerism. Sorolla drew on their genius. This is probably why he is not better known.

Nevertheless, genius is genius. Good painting is just that. A delight to the eye. My days in Spain were well spent between the famous and not so famous. I was hit by the intensity of presence in the Saints of El Greco, revisiting works made popular over the centuries. Then I was soothed into ecstasy by the painted deliciousness of well stroked colors and impressions, in the Belle Epoch masterpieces of a lesser known virtuoso. One is led along to Look at Art. What may look like works at the opposite ends of the stylistic stick, end up being brothers in the great creative world of painted mastery. 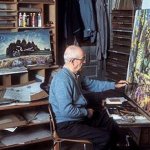 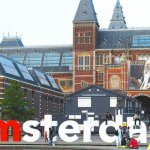