Few Architects had such a Divine Connection as Antonio Gaudi. His architecture, especially Parc Güell, had an essential impact on my vision of art and art-making. It may sound crazy, but Gaudi helped me understand Jackson Pollock’s Paintings. Pollock discovered that paint and material itself, fused with the dynamic action of the Artist’s will, was enough to carry the subject matter of a great work of art. The Passion of the Artist for his painting process did the most for the painting’s communication of connection on a deep level. Gaudi showed me this as well in the mosaics of Parc Güell.

This is an explosion of color and intensity that hits you immediately. You may ask, “What does it mean?” What does the grass mean when you look at it? There is a purity of color and form that has no reference outside of itself, and then it is up to you to make your own associations and relationships. You are freed along with the Artist to engulf yourself in the Pure Joy of Color. Color explodes and enters your being through these works.

You get the point. You could call it a stratum of intense Action, an “abstract expression” of the artist’s pure and raw energy of painting, or in the case of Gaudi the tiling of a surface with bits of brilliant ceramic color that will cover and strike the sitter with another realm of sacred reality.

I was moved by this rambunctiousness. There is a shimmering of substance in the mosaics of Antonio Gaudi. I was never the same after seeing them. I wanted to have that kind of freedom in my own work and not be confined to the “reproduction about an object,” but rather I wanted to create the object itself. As Pollock said, “I am nature.” That was the highest thought in my view as well. Color blasted back into my life like an avalanche of possibilities from the palette of Creation Itself. I could draw from anywhere I wanted. I drew from my intense memories of the Joie de Vivre I felt during my time in Barcelona.

I would visit the Ramblas in central Barcelona and be uplifted into a flurry of cultural immersion. I was exhilarated by Barcelona. Everything was different. People seemed to embrace Life and suck the marrow out of it in Spain, rather than cope with it and merely survive in it. They knew how to relax and embrace Joy. I was transformed by my two months there in 1978. It set the stage for a burgeoning of creativity that would flower into a new series of Paintings I called the Barcelona Series. Color itself came into my forefront, almost to my rescue. The “black and white” drawings of my Cleveland Institute of Art days were fastly becoming a thing of the past. They proved certain craftsmanship, a certain drawing prowess, but they were indications of a kind of mild depression that was so common in the grayness of Cleveland, on Lake Erie in the northern midwest, in the snow belt of the winter of my discontent.

Gaudi gave me permission to blast color onto the scene of my surfaces with a nonchalance of carefree expression. Paper paintings became my thing. And these became collages. I would “recycle” works. A painting that went by the wayside would be cut up and fragments of it pasted like mosaics into the next painting.

What I learned from watching Jackson Pollock painting in some of the movies about him was how he would “make a pass” over the canvas with a singular action. Perhaps it would be a particular color or a type of gesture. Nevertheless, he would build-up the stratum of his paintings with these various distinct passes and layers. I took a similar approach to my process. I would put down a layer; then add a grouping of collage elements; then add a series of painted forms; then another layer of collage; etc. I gave some of the pieces multi-faceted borders of color. The whole process was fun. Something different in my artistic endeavors was this newfound inner Joy.

At the time in 1978 the Sagrada Familia of Gaudi, his remarkable basilica cathedral, was only partially completed. It did not even have a roof. It was still stunning to go up to the top of the spires and see the vistas of Barcelona and the far off Mediterranean coastline from the high vantage point. What I recall at that time, in its very unfinished state, it was still perfect in its organic evolution. Like a sapling is perfect before it grows into a great oak, it was whole and complete in every stage along the way. It was not until 2018, 40 years later, that I would return to the Sagrada Familia and take in the full impact in its more finished version.

The light and color engulfed the interior from the jewels of the stained glass filters. I was transported again to an aesthetic ecstasy by this genius architect and Creator, Antonia Gaudi. In his own day he may have been considered eccentric or “outside the box” of normal architecture. But in Barcelona, he was embraced as their native son of pure genius, and thank goodness his legacy lived on long enough to prove it. Future generations remained dedicated to his vision and therefore had the wherewithal to keep working on the basilica until its completion, according to the maestro’s plans. The Sagrada Familia is still not finished after over 100 years of construction. But the cathedral is projected to be finished in the mid-2020s.

THE COLOR OF JOY

Does Pure Joy have a color? This is apparent to the painter. It does. It is in a relationship with the paint, the subject, the colors to each other, the movement of painting itself, the pigment, the surface, and the whole action of creating something in the mind and heart of the painter.

At some point in my artistic development, I saw the purpose of Art is to lift us into higher realms of sacred reality, and this is transcendental of those lower levels of languishing doubt and suffering. There are plenty of artists who do well to depict the despair of the human condition or the domination of the powers that be. I am not one of those. Art is to lift us to greater levels of Pure Joy. If the artist and his or her art are not doing that, then, in my opinion, it is a wasted effort, an incarnation unfulfilled.

My only standard of measurement at the end of the day is whether or not the work of creating something brought me more Pure Joy. If it did this for me in the making of it, the best chances are it would bring anyone else observing this result to a state of similar Pure Joy. In the grand scheme of my life’s outpouring of holy and dedicated expressions, this is my highest purpose and expectation for my painting. Or for anything creative to which I would dedicate my attention.

Thank You for reading. Please go here and become a Patron of this Pure Joy!

The SPIRIT PANTRY for a MEANINGFUL LIFE 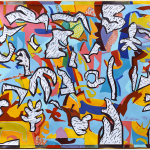 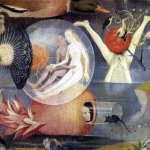 A PAINTER’S LIFE; OUT ON THE EDGEPAINTINGS