I got a message on Facebook from one of our friends and students in Estonia. She asked for a BABAJI painting. She requested I paint her a new BABAJI painting and she had a certain amount of Euros to spend, and would that be an OK price for me? It was in the ballpark of my prices, so I agreed. She also said she did not care how long it would take, or how I wanted to paint it, or when it would arrive to her in Estonia. She said, “I leave it now all to you guys – you and Babaji. :)”

She gave me total artistic freedom to paint BABAJI however I was inspired. It does not get any better than this for an artist. So I thought, “I am home in Nashville for a few weeks. Why wait? Now is a good time to paint BABAJI FOR ESTONIA.”

I had some blank canvases left over from the last European tour. I pulled one out and taped it up on the wall and began to block it out. I used a photo as a model I seldom use. It is BABAJI meditating, draped in garlands of flowers. One of my favorites of HIM. 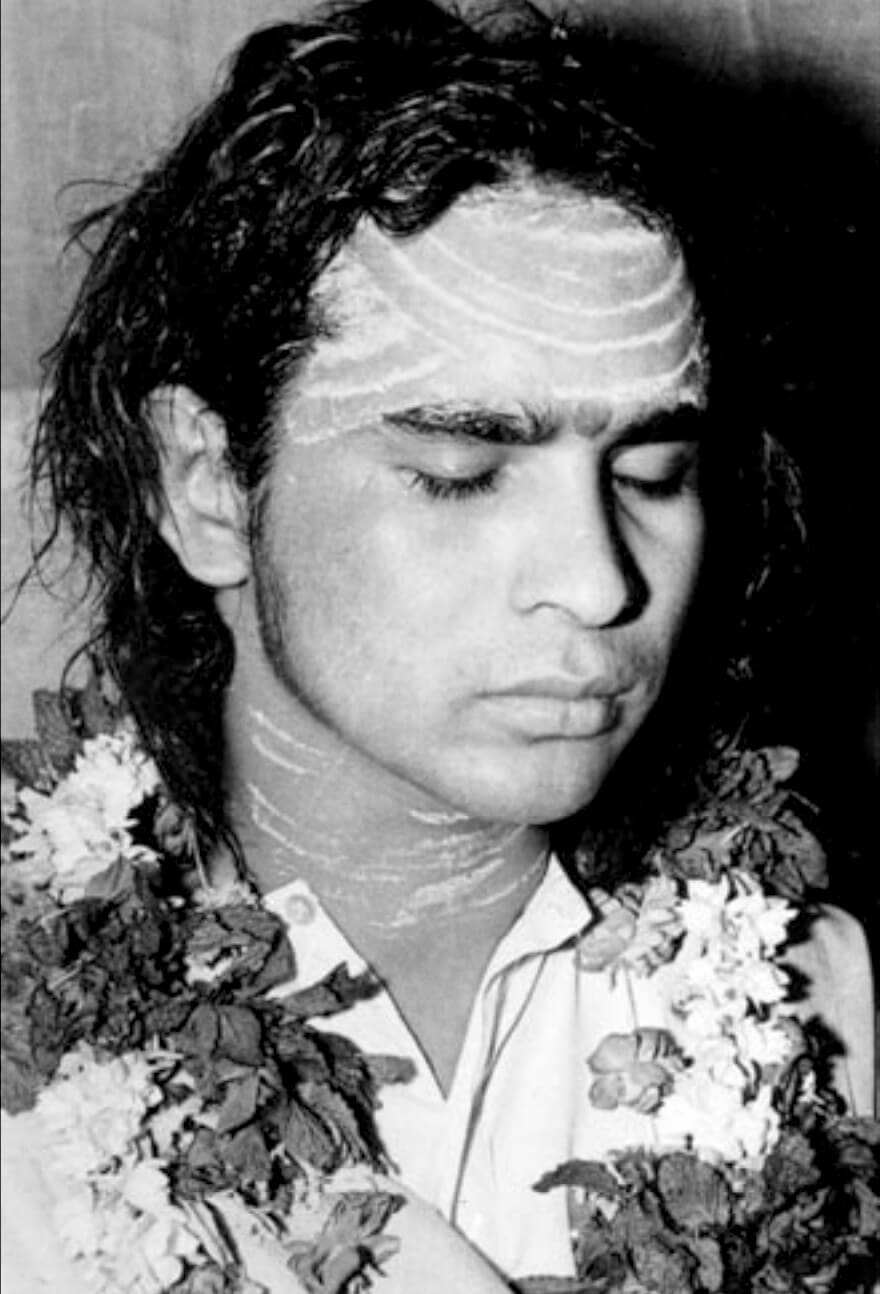 Of course the painting went through a number of “morphs.” It started out in a kind of magenta color for the sketch. Then a glaze of blue. Then Sondra and I were looking at it one evening and we both said to each other, “The magenta is not it! Where did that come from?” It was too sanguinary. Too damn “bloody.” Maybe Halloween was on my mind. OK, when that happens I have to do something that is bold and drastic to shift the energy. 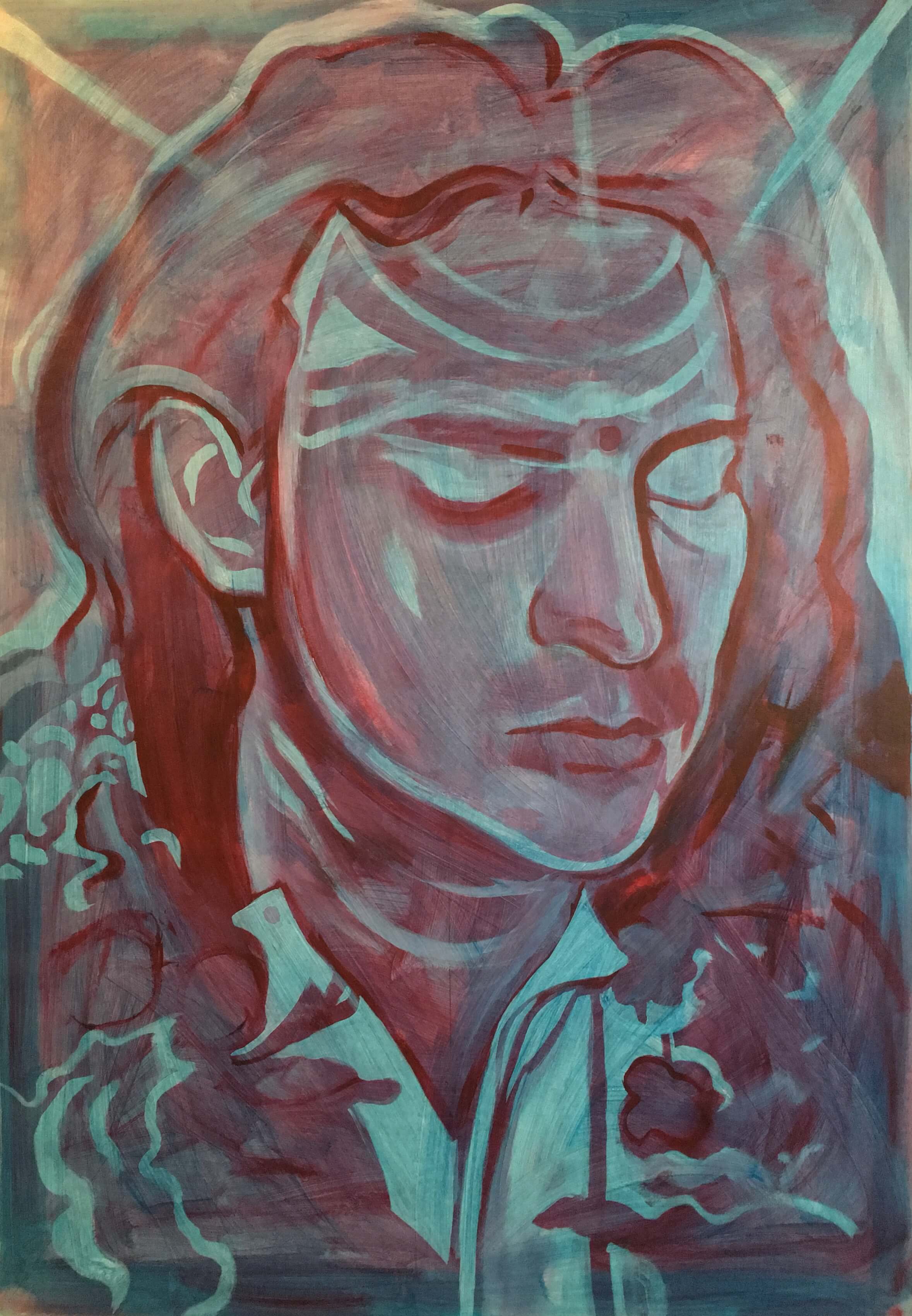 I had to rethink the whole direction of the work.  Picasso once said, “Painting is a series of creations and destructions.” So now I had to “destroy” the mood of the magenta completely. That would require a new “pass” of blue. “But geez, I am painting BABAJI, not Krishna,” I thought.” 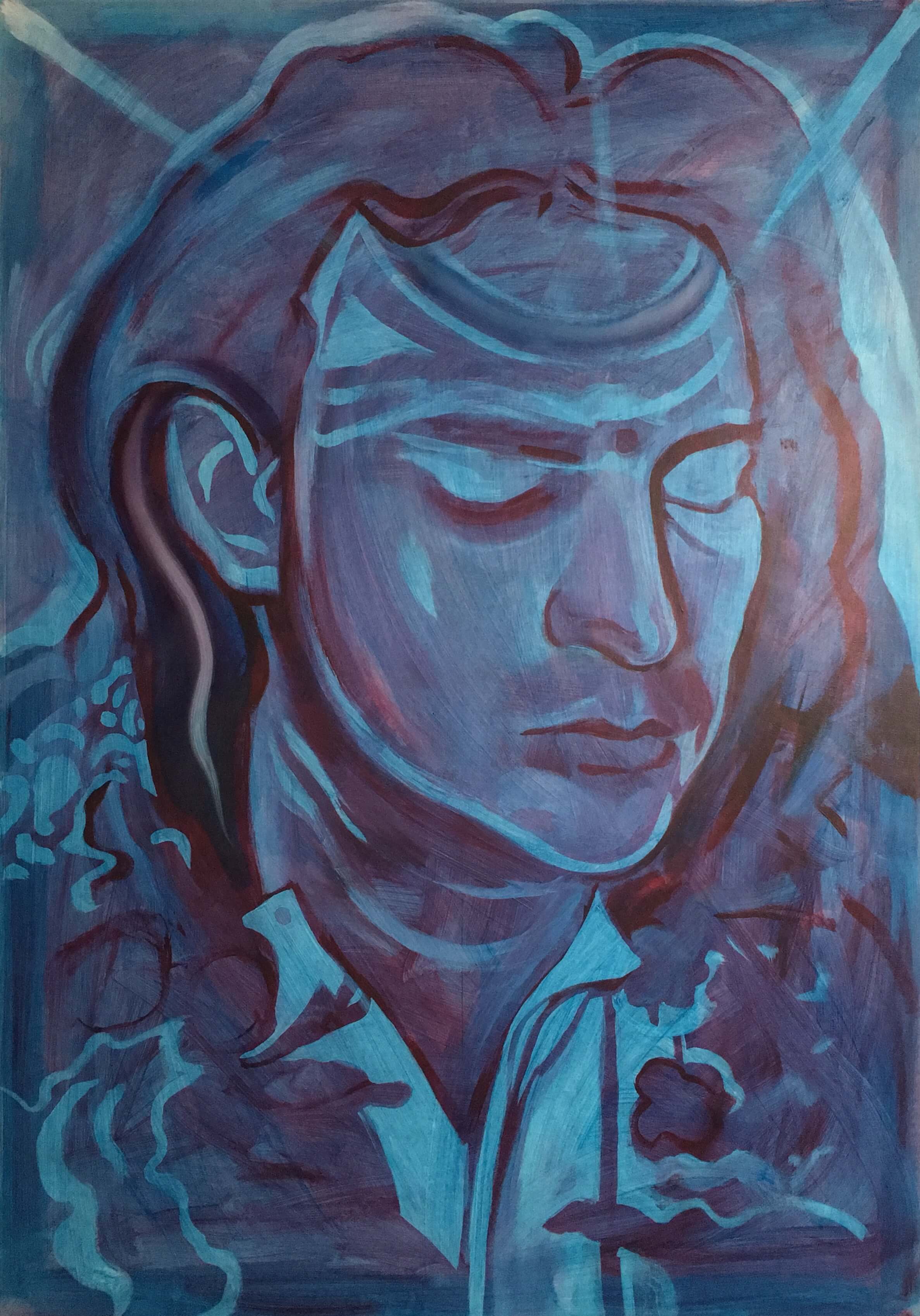 Sondra walked in the room after the second pass of blue and said, “Wow, you really changed it now.” That set the stage for a whole new direction. And after all, the colors of the Estonian flag are Blue, Black and White, so I wanted to be in that energy with the BABAJI FOR ESTONIA. I painted a Blue Divine Mother years ago in Estonia, and a lady bought the painting in the training before I even finished it. SO BLUE was definitely IT!! 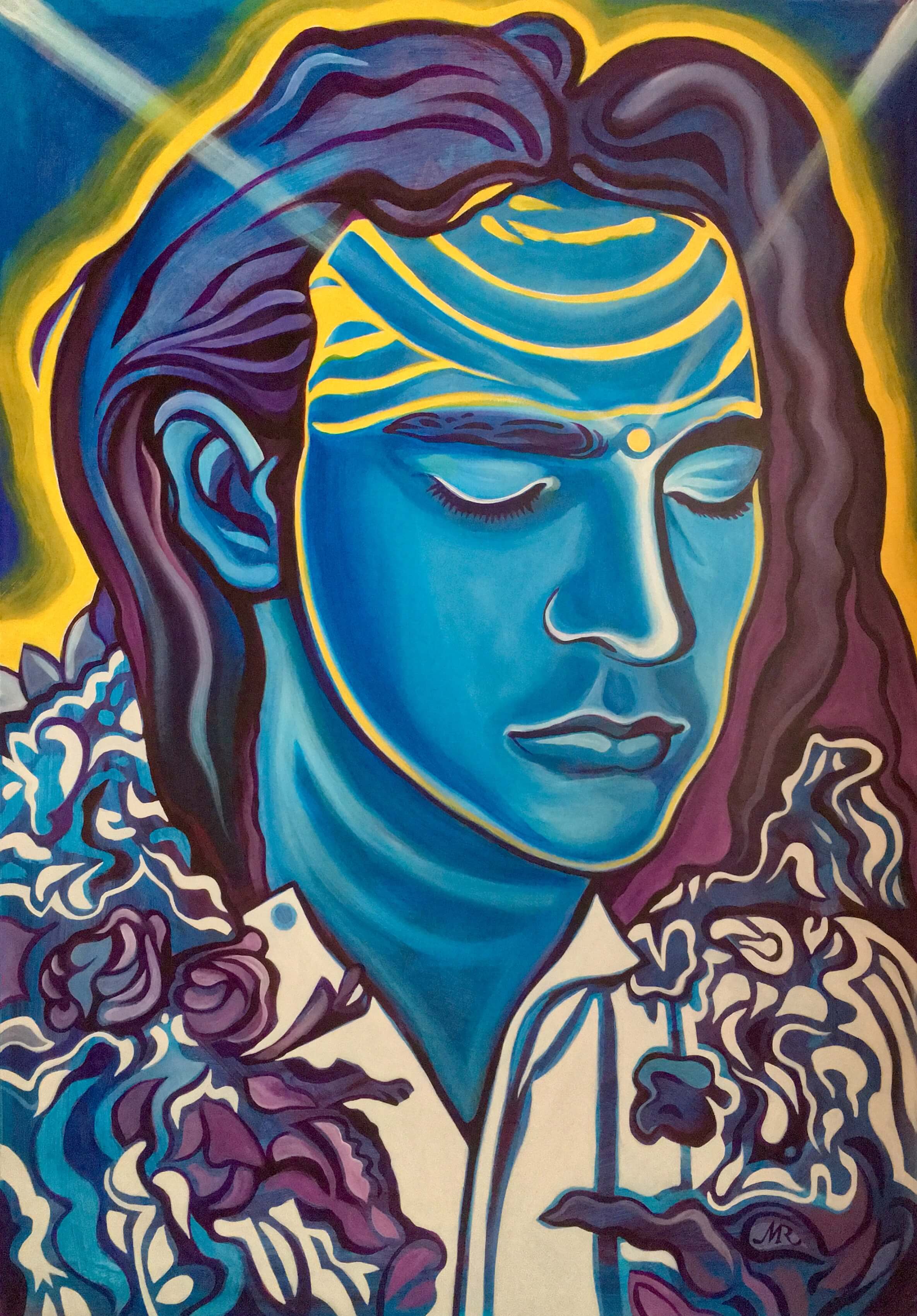 I gradually got into the Blue. What a striking blue, I thought. Who cares if this BABAJI is melding with Krishna? They are all in the same MIND of God. The blue made the yellow aura and marks of chundun on the forehead even more distinct. POW and WOW! I had a great time painting the flowers. Some of the magenta remnants easily translated into plumb. I was on my way now. And with a couple days of refinement, VOILA! There emerged BABAJI FOR ESTONIA. (102cm X 144cm; 40″ X 58″)

THANK YOU Maren Penu for going with your inspiration to bring BABAJI’s presence closer into you life,  closer into your home, and closer into you heart, where He already resides. BOLE BABA KI JAI! we say: “Hail to the Simple Father.” LOVE to you Maren. Your home will be eternally blessed. It’s on its way to you now, to bless you, your family, and all of ESTONIA!

PS. Giclees are available of this BABAJI for sale. Giclees are original quality prints  of the painting on canvas. They are virtually EXACT replicas. I have two the same size of the one I sent to Estonia, and two half the size.

BABAJI, My Miraculous Meetings With A Maha AvatarPAINTINGS, POEMS 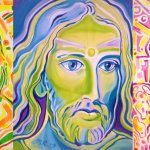