Long have I known that the mysteries of ancient India are illustrious and deep. She captivates anyone who has the eyes to see and the ears to hear. She is a force of spiritual reckoning to deal with, for anyone seriously pursuing the higher truths of a meaningful life. The philosopher Will Durand refers to India as not only a “motherland” of the many gifts of culture we have inherited from Her in the West, but he goes so far to say that Mother India is “the mother of us all.”

My first trip to India was in 1987 with Sondra Ray. Few I have known in the West who have imparted such a love for India as she has. Countless groups has she taken to the feet of her master, Babaji, but even more countless are the pilgrims she has led into the depths of a love and homage for the Divine Mother of India of which Will Durand speaks. “Jai Ambe, Jagadambe!” These words ring true in the heart of Sondra Ray who has surrendered to this primal power of ancient India. The Divine Mother is a pillar of India’s illustrious past that speaks ever so presently NOW, to those who yearn to find spiritual solace in a world that seems anything but solacing.

I would say the island of Elephanta in the Bay of Mumbai (Bombay) takes us a step further in this Love of the Divine Mother. Sondra’s teacher, Shri Shri 1008 Wale Haidakhan Babaji, a Maha Avatar of the highest order (not born of a woman), a manifestation of Lord Shiva Himself, said upon taking His final maha samadhi, “I leave everything in the hands of the Divine Mother.” Shiva, Brahma, and Vishnu held up the legs of the Divine Mother’s throne, and placed Ambe Jagadambe above all else. Elephanta emerges out of the earth of the Divine Mother Herself. It is manifested into the side of a mountain, carved as one piece, not “put together with parts,” as a whole divine expression of this interplay between the Male Powers of Divine Ideas and the Female Powers of Manifesting these Ideas into Divine Forms.

Its inception goes back to the 6th or 7th century of the common era. One of the most powerful sculptures is a 30 feet tall “triple head” of the main Hindu Male Gods. The Trimurti , as it is called, depicts the three manifestations of the Divine Forces of Creation, Sustenance, and Destruction—Brahma, Vishnu, and Shiva. This Trimurti is world famous in the heritage of India. I saw it face to face with Tara Singh for the first time on our pilgrimage to Ramana Maharshi’s ashram in Tiruvanamalai in the year 2000. We stopped off in Mumbai first, and took the hour long boat ride out to the island to see this remarkable holy temple.

Twenty-two years later I went back to have another encounter with Elephanta. Sondra had never been there, and I wanted her to experience the power of this place of pilgrimage that loomed so large in my recollections with Tara Singh. (See Here) We took the boat from the India Gate near the Taj Mahal Hotel where we were staying. It takes about an hour by boat to get there, as one passes by the large ships that are anchored in the Bay of Mumbai, one of the principle and busiest ports of India and Southeast Asia.

After landing at the wharf on the edge of the island, a small gauge train takes people to a long and wide open stone stairway. At the top of the stairs that ascend the length of a football field perhaps, is the entrance to the temple, where one is greeted by a set of stone pillars. The whole temple is carved into the side of a mountain that covers the main portion of the island. Because I knew this time what to anticipate, we approached the temple entrance with great expectations that were completely fulfilled.

Once inside, the treasure trove begins to unfold. First one notices the massive pillars that form colonnades which extend in a number of directions. The fluted pillow shapes at the top of the columns seem to support the mountain itself, and at the four corners of each column’s base, where the rectangular base meets the rounded top half, meditating yogis hold the space to support this massive volume of stone above.

This column above has Ganesh in a meditating yoga pose. Everything lends itself to meditation and divine adoration in this cave temple. The God Shiva is depicted in various scenes with His consort Parvati. Other attending figures round out the retinues of holy figures. There are groups of rishis and yogis surrounding the Gods at every turn.

A Temple of Inner Worship

All temples are designed for some mode of holy worship. In this temple, Shiva is worshipped in the form of sculptures that depict Him in various creation modes and myths. But He is also worshipped in the form of a giant lingam that is housed in an inner sanctum—a temple within the temple. This lingam, in its beginnings, was most likely tended to daily. Offerings would have been made to it, open flames were waved over it, and mantras and chants were sung around it in homage. Surrounded by flanking guardians who stand as sentinels to watch over its sacred nature, this inner sanctum is the holiest of holies.

The guardian figures are in a meditative trance. They are immersed in the ecstasy of transcendence. This would have to mean the creators of these sculptures were also in their own inner space of self-realization. One could not sculpt these types of beings without himself being in a state of transcendental bliss. The stillness and peace of God inside this rock-cut temple offers a spiritual treasure trove of sublime energies. One is not the same after experiencing these highly charged frequencies, transmitted in stone. They touch anyone open to receive them on even their first visit to Elephanta. This is why Tara Singh wanted to take me there. He knew what the heritage of India had to offer any serious spiritual seeker. The authentic power of such a place speaks of the overall divine gift that Mother India still transmits to the rest of the world.

One might think the treasures of the spirit far outlast the pleasures of the flesh. Yet these physical depictions in stone of lofty engagements of humankind—be they in the form of Gods and Goddesses, or holy men and women who surround these divine incarnations—give us pause to consider our own divine life actions. In the image of our Creator, we are God-like in our highest echelon of divine evolution of body, mind and spirit. Do we fully realize this? At Elephanta we are given a short bridge between the physical dimension of human endeavors and the divine dimension of God-like actions in these works that originated from a culture far more advanced than ours in their understanding of higher frequencies of human existence. Ancient India obviously knew something we do not, or have forgotten and need to be reminded.

What does it mean to “walk in a sacred manner,” in which every movement and gesture in our daily life is fully dedicated to some divine action? The beings who created Elephanta would have known this. All their faculties were gathered together in an expression of the sacred. So much were they inspired they could see the Gods embodied in the side of a mountain, and then have the vision, skill, and determination to merely remove the matrix of stone around these figures of divine revelation. Their tools and their chisels worked in tandem with supernatural guidance, as the Gods themselves moved the hands of humans to create such as treasure on earth, verging on Heaven itself.

We are all on a trajectory of return to a Holiness we never really lost. The inner workings of the human soul to realize its Divine Connection to realms of infinity hold fast to our original perfection. Our souls are awakened in places like Elephanta. We remember God, and our sacredness of Father, Mother and Child. The creators of this Holy Place knew what they were doing, and also knew how to shape these stone masterpieces to hold the Sacred Vibrations of a Divine Life far into perpetuity. The perfection is palpable and dynamic. You cannot help to be moved, and moved in a great way, even if you know nothing about Shiva, Parvati, the acts of the Vedic Divinities. You get sucked into the dramas and enactments that the sculptors of this sacred era left behind, and are surrounded by their legacy of a very high culture of human endeavors. Elephanta moves us toward our own perfection, palpably and certainly. This perfection is ours to claim. These stone figures help us claim it.

Shiva brings the Goddess Ganga to earth, balanced by the approving support of His consort, Parvati. The waters of life flow again and sustain humankind with the necessary elements of existence—earth, air, fire, water and space. Eternally are we blessed. Sacredly are we awakened. In this holiest of holies in a cave in the middle of the Bay of Bombay, humankind’s fate is admired and sustained by the sacred benefactors of Mother India, given to the rest of the human race who has yet to catch up with them. Om Namah Shivay! With love from Love Itself. I hope one day you will go there with us. 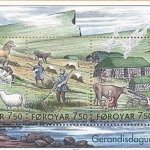