A Cathedral That Transcends Itself.

Recently Sondra and I visited the Sagrada Familia Cathedral in Barcelona, designed by the great Catalan architect, Antonio Gaudi. In his own time he was considered revolutionary. He had a strong connection to nature, and looked toward nature even for mathematical principles that would change the way things were built. The Sagrada Familia is his “Mona Lisa,” and it is still in construction, almost 130 years after its conception, and over 90 years since Gaudi’s death in 1926. 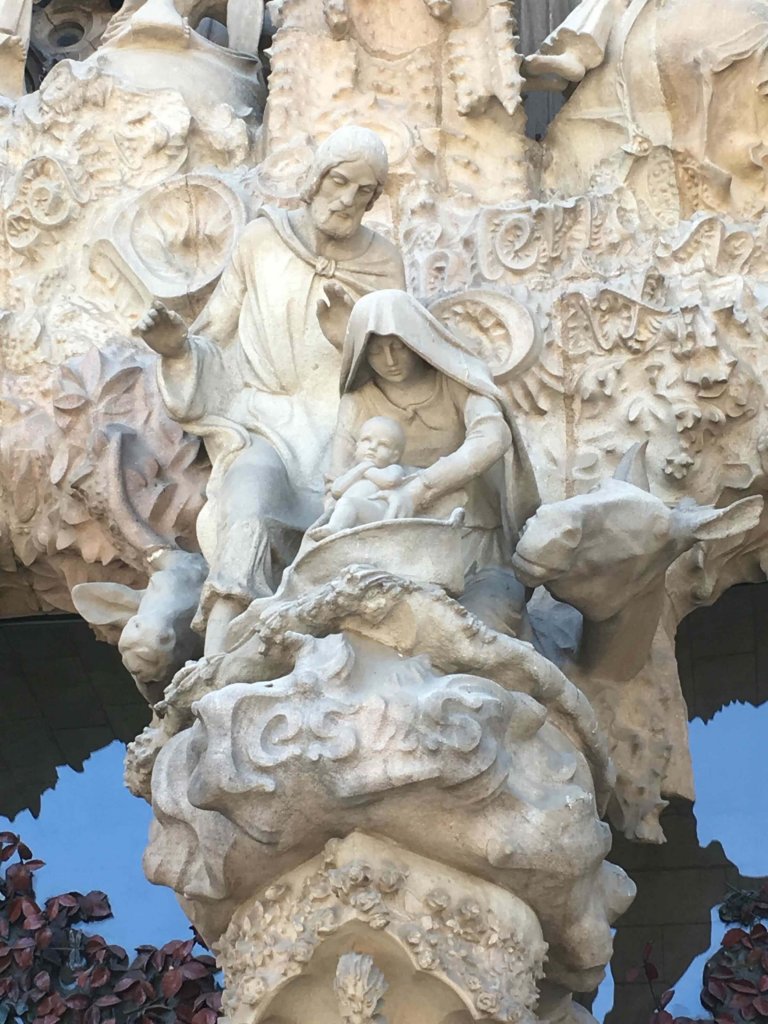 The Holy Family over the main entrance to Sagrada Familia

The organic nature of the surfaces, and well as the structure of the church, is very noticeable. It blows your mind. This depiction of the Holy Family seems to grow out of an organic mould of leaves and farm elements, rather than a sculptor’s plan. It rises above the main entrance. Along side of it is the Adoration of the Magi, equally growing out of the wildness of the background. 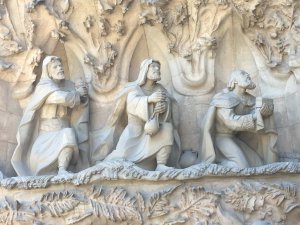 When you go through the massive bronze doors into the transept of the church, a closer look yields a very interesting surprise: the ivy leaves are full of bugs. Beetles and other insects fill the surface with a kind of lively foliage that seems more fitting an entrance to a park, than a cathedral. But is it not a “house of God?” And being a house of God, why would not all of Creation be honored by it? I was very glad to see the beetles. 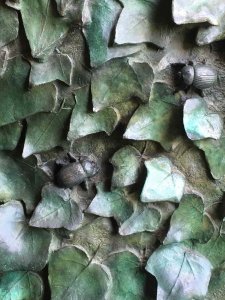 One passes through the doors into another dimension of light and holiness. Leave aside that the Church is honoring the passion and the life of Christ, it is also honoring the elements of creation that are so beautiful in Gaudi’s full expression. He has designed the colored glass windows to shed a kind of spectrum, a Rainbow of Holy Color, onto the columns and other surfaces. I was almost in a state of awe when I saw its beauty. 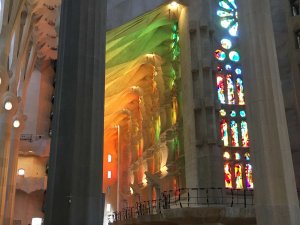 The bridge between nature and the high art of cathedral building is strong in the work of Gaudi. One almost feels these stone structures have grown up and out of a new earth, and a new way of seeing and looking at things. The geometry is secondary to the feeling of natural transcendence, yet it is through the new relationship with an organic geometry that the bridge is actually crossed.  It is as if the sun, the moon and the stars have entered into the quotient; and the rocks, the trees and the moulding matter of the forest floor emerge to form the necessary structural elements of this cathedral of the sacred holy family. 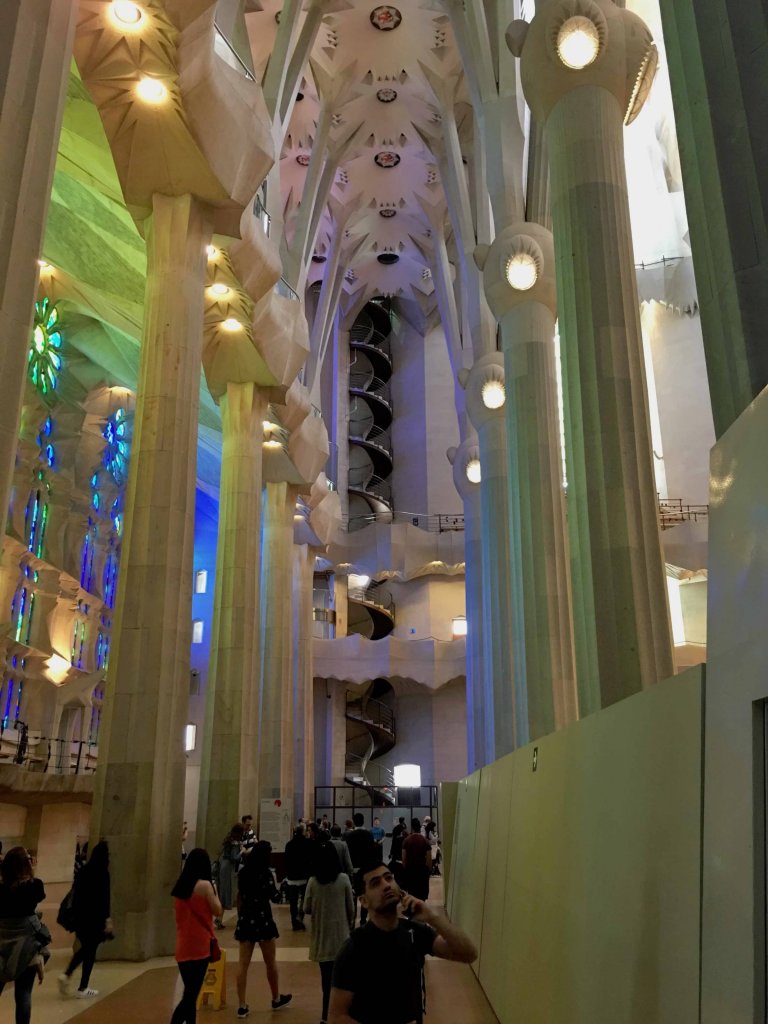 It is clear that Gudi looked to the logic of nature to support his art. He made the column base to resemble the roots of a tree. Not only did this spreading out effect give the base more load bearing capability, but it connected the design with a kind of universal logic of the natural world, prevailing in Guadi’s universal vision. 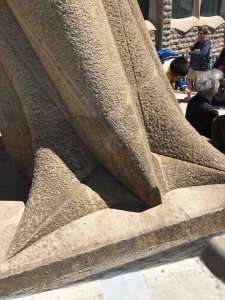 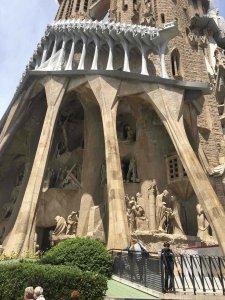 The slant of the columns give them more capability to support greater loads, but also it gives the building a dynamic feeling that seldom comes into play in the perpendicular style of most architecture. “Straight up and straight across” were not the principles in Gaudi’s repertoire of architectural design elements. He would not be betrayed by convention. In fact, he resurrected his vision again and again to include these new concepts and effects. He could not even see his finished building, but rather entrusted the design with a hundred year plan that would be taken forward by others. Thank goodness his plan was closely followed by people who recognized his genius. 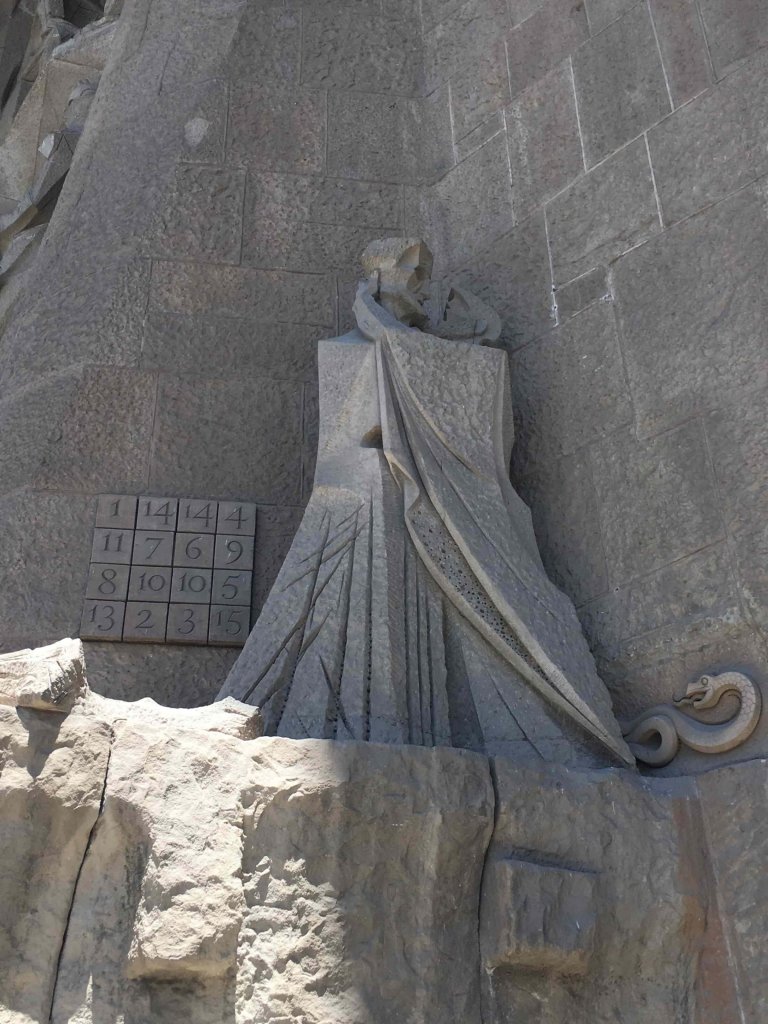 The Kiss of Betrayal

The Sagrada Familia is a Transcendence

In spite of the kiss of betrayal, indicative of the fears that keep us holding onto the conventions of the past, and onto our selfish concern with “me and mine,” Gaudi transcended all of this. He rose to the heights of his Creative Genius in a new relationship with the Christ, which included the elements of nature. He had a vision of Light that is now close to being fully carried out. They predict the entire Sagrada Familia will be finished by 2026, 100 years after his death. In the greater scope of things, this interval is nothing in the presence of the timeless, which forms the main quality of the spark of Creation that inspired Gaudi in the first place.

You may like to visit Barcelona just to see this amazing Cathedral. I guarantee you will not be disappointed. You can see more pictures here of the Sagrada Familia here on my FACEBOOK.

When all is said and done, the Sagrada Familia offers an experience of the Holy Light that comes forth from the Sacred Family: Divine Creator—Father, Mother and Child as ONE. This is the Creation of the Trinity that we live in, on our beloved planet earth. 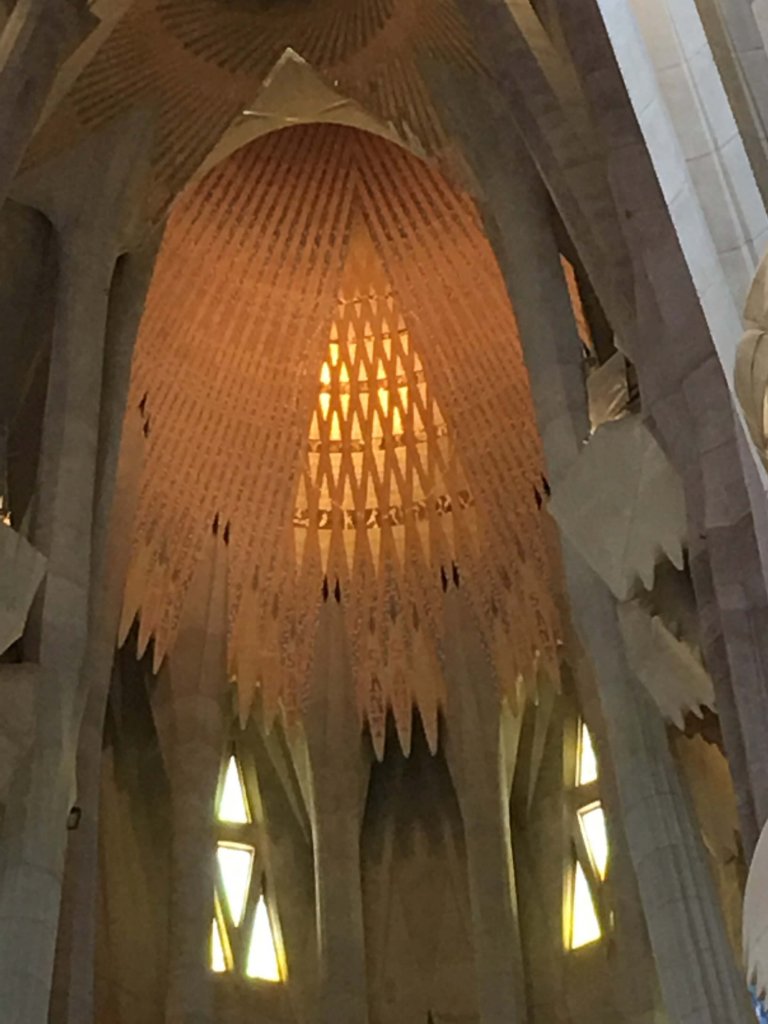 HOLY LIGHT of the TRINITY 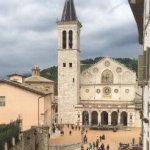 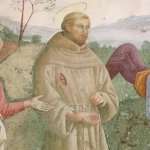